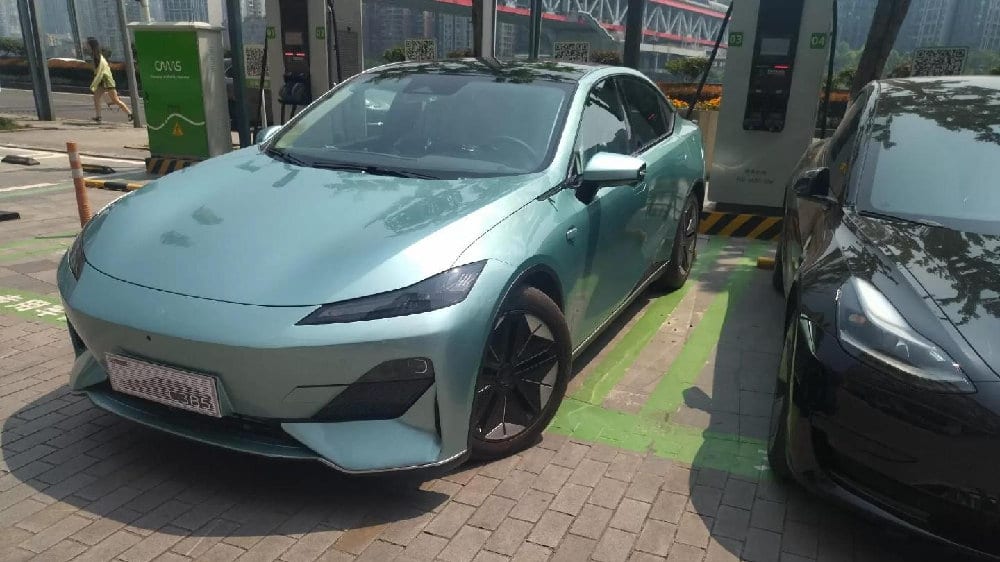 Here we have a set of spy shots of Changan Shenlan pure electric sedan C385 without camouflage. The car has a distinctive blue color, which looks more pretty than the Tesla Model 3 on the side.

Changan Shenlan (长安深蓝) is a new brand under Changan New Energy, itself a subsidiary of Changan Auto. The new Chinese EV brand was announced on April 13. The C385 is the first model based on Changan’s new electric platform, EPA1. And it will be available in pure electric and hybrid versions. In addition, Changan will build five new models based on platform EPA0 and platform EPA1, of which the model codenamed A158 will be officially released in March-April 2022.

As we can see from the photos, it has split headlight clusters, a sharp nose, and a slightly collapsed front hood in the middle, which looks very sporty. The height of the front end is significantly lower than that of the Model 3, giving it a more low-slung feel.

The sporty lines of the sizeable slinky coupe are significantly longer and more spacious than those of the Model 3. Elements such as frameless doors, hidden door handles, and unique A and C pillar trim look great.

The suspended rear wing with a high-class light strip, the central cocked detailing, and the protruding rear bumper show a cool sense of design.

But the new car’s LOGO is still covered up, even though it has been equipped with production parts.

It is worth mentioning that the C385 has an extremely low drag with a Cd of only 0.23, which is on par with the Tesla Model 3. What is the use of such low wind resistance? Indeed, it doesn’t help at low speeds, but when the vehicle reaches 120km/h, air resistance will account for about 70% of the total drag. So the low drag will surely help to improve the range.

Meanwhile, the C385 also has good power performance, with a power output of 190kW/320Nm surpassing most electric cars in its class and a net saying of 0-100km/h acceleration time of 5.9 seconds.What’s more, the C385 has pulse heating technology to improve the car’s condition in winter.

So, it seems that the C385 does have excellent performance and is very surprising. Some people believe that the dominant players in the Chinese new energy vehicle market will be Chinese brands. In my opinion, the Changan Shenlan C385 is good enough to be in the first tier of new energy brands, but it still try hard under the fierce competition. Perhaps looking for overseas markets is good. The C385 will be officially announced in the second quarter of 2022, competing with the Tesla Model 3, ARCFOX αs, IM L7, NIO ET5, and BYD Seal.