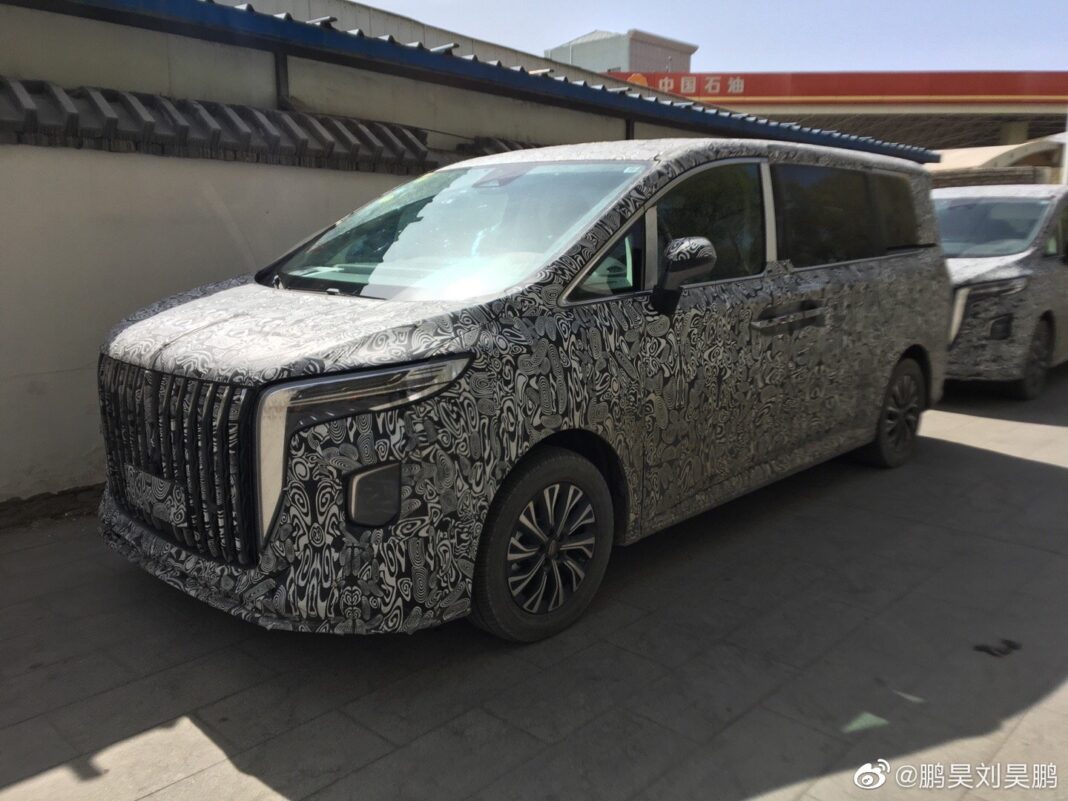 The Year of the MPV is well underway in China with the national flag bearing marque, Hongqi, the latest to throw their hat into the ring.

Several spyshots have been caught of the imposing people carrier in recent months but these pictures of a pair of development models give us the clearest indication yet of what to expect.

Hongqi have already stated that production of their first MPV will begin in June so a launch of the production model is likely just around the corner.

How to Grille Right

Hongqi’s by now familiar ‘spectacular waterfall’ grille once again takes pride of place on the MPV and it may be the best iteration yet of the bold design feature.

Flanked by flag-shaped silver inserts that house the ‘flying wings’ running light design, the grille looks really suited to this style of car with its vertical elements giving the car a noble-looking appearance.

There’s no split-lamp treatment here with the headlights and running lights sharing the same units, with foglights appearing lower down in separate recesses.

Also present under the disguise is the brand’s ‘flag-through logo’ design, which sees the brand’s iconic red fin on the bonnet run into the grille area.

Along the flanks, the disguise hides a rounded-off, rectangular glasshouse with plenty of chrome trim.

Sliding rear doors also feature, but not much else is discernible aside from some surface treatment in the lower door area.

At the back, a more upright iteration of the brand’s rear light treatment is visible, including the de facto lightbar, hidden in these images, and vertical light units with some fine LED elements and chrome trim.

A subtle rear bumper integrates nicely with the rear design, along with a low boot lip to aid loading, and a sizeable spoiler above the rear window.

For the first time we’re able to get a peek inside the Hongqi’s high-end interior and, while there are some luxury touches, we can’t help noticing that the dashboard appears a bit light on the multimedia front.

Certainly in comparison to the upcoming Voyah Dreamer, the Hongqi looks a tad spartan with a single screen in the centre of the dash and a cowled unit ahead of the driver.

Hongqi have opted for the standard logo on the steering wheel, as opposed to the sunflower logo offered on the LS7, and a van-like dash-mounted gear selector.

Some physical switchgear appears below the central vents, as does a wireless charging dock, but a lack of unified central console does feel outdated in this segment with lowdown cupholders, small armrests, and a wood-trimmed table positioned between the front row occupants.

Second row occupants fare better with captain’s chairs featuring wide armrests providing the best seats in the house. We’re speculating here as the images are not conclusive, but it appears there may be small screens present in the armrests, perhaps to operate tablet-style digital screens, though these are also not visible here if they exist.

For what it’s worth, the second row seats do look beautifully sculpted and electrically-operated footrests should also be present along with lots of lots of fore-and-aft adjustability.

Metallic speakers in the doors hint at a decent sound system but there are no official details as yet.

Additional images show a large sunroof, but by no means a panoramic one, while the third row appears to be bench seats only, making the MPV, expected to take the name QM9, a seven-seater in a 2+2+3 formation.

We’re expecting the QM9 to come in at over 5-metres long but the tight rear bench seat might hint at a wheelbase of more like 3-metres rather than the 3.2-metre standard for large MPVs.

It remains to be seen whether an electric ‘E-QM9’ might one day be on the cards but for now we’re fairly sure that a 2.0-litre turbocharged four cylinder petrol unit will join a 3.0-litre turbocharged V6 on the options list, both paired with a 7-speed automatic dual-clutch gearbox. Power should be around 252 hp for the 2.0-litre and 283 hp with the 3.0-litre unit.

Hongqi, meaning ‘Red Flag’ in Chinese, is a subsidiary of First Automotive Works (FAW) and is considered China’s national automotive brand as producers of the L9 state-limousine used by President Xi Jinping.