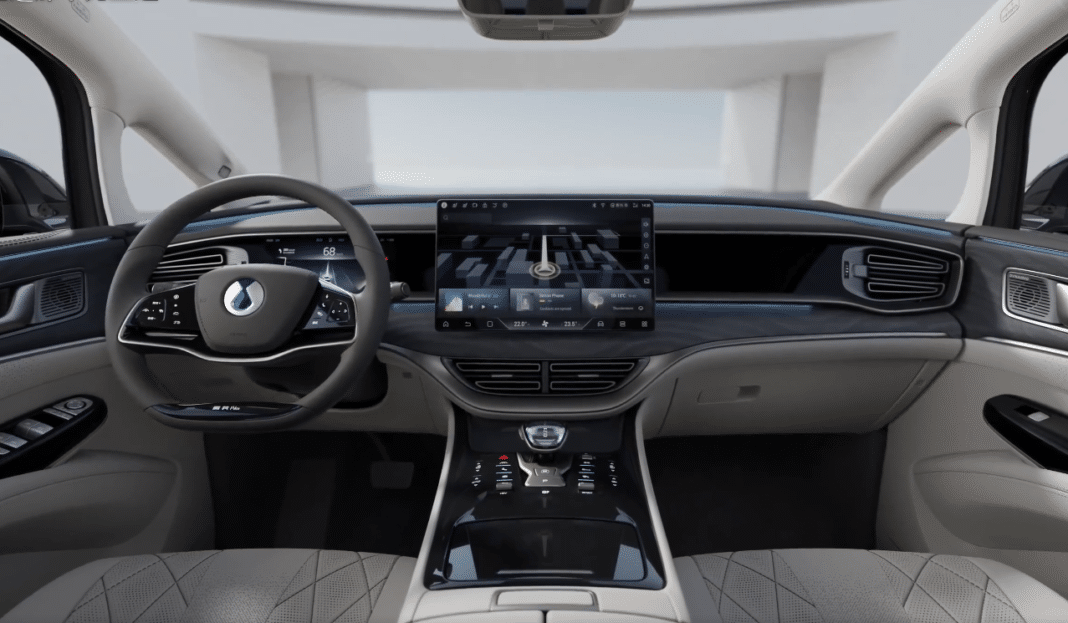 An official video revealing the interior of the Denza D9 has been leaked online by the company’s Sales General Manager.

The MPV will be the second model in the brand’s line-up and the first to be released since Mercedes-Benz exited their joint venture with BYD, who Denza now sit under.

While not the highest quality video we’ve ever seen, the digital rendering of the D9’s interior gives a positive first impression.

Starting in the cockpit, the D9 features a two-spoke steering wheel, joined up centre console, and the now standard 15.6-inch rotating central screen from other BYD models.

There’s also another digital screen behind the steering wheel for the driver, but it looks like there won’t be a third screen in front of the passenger seat.

Two-tone upholstery, most likely leather, provides a really clean and bright looking space while touches of metal trim and switchgear, glossy black plastic on the console and armrests, and a crystal-effect gear selector stump complete the premium feel. Some touch-sensitive buttons are visible alongside standard buttons and dials.

DynAudio speakers are also present on the doors, the Danish company now apparently the speaker of choice in the Chinese auto industry of late.

The key highlight of the D9 looks to be the second row which, as is becoming standard practice in this category, comes complete with twin captain’s chairs.

Not only that but there’s a plethora of digital real estate on show too with twin tablet-style screens mounted on the back of the front row seats, plus small screens built into the armrests to control them, similar to those in the Maxus G90.

The larger screens could even be the same 15.6-inch units as used on the dashboard giving laptop-sized levels of entertainment.

Second row passengers also benefit from cupholders built into the back of the centre console, plus two cubby drawers for extra storage.

We’re going to go out on a limb here and suggest that those captain’s chairs will feature heating and massaging functions, as well as full reclinability and footrests.

A 2+2+3 seating formation is also clear to see here, with a bench third row forgoing the luxuries of the second row.

When will we see it?

Details are still fairly scarce for the D9 but we’re expecting a launch date in May and a price tag of around 300-350,000 RMB.

What we’re fairly sure of is that both PHEV and BEV powertrains will be offered in line with BYD’s shift to electrified-only production, with the model shown looking like the BEV model based on that mostly metal grille.

While the D9 is clearly a handsome entrant in this field with some really attrative surface treatment and a quality set of alloys, it will have to work hard for attention.

With this being the unofficial Year of the MPV, it’s going to come up against new rivals from Hongqi, Lynk&Co, Zeekr, Voyah, and Wey, as well as the Maxus MIFA 9/G90.