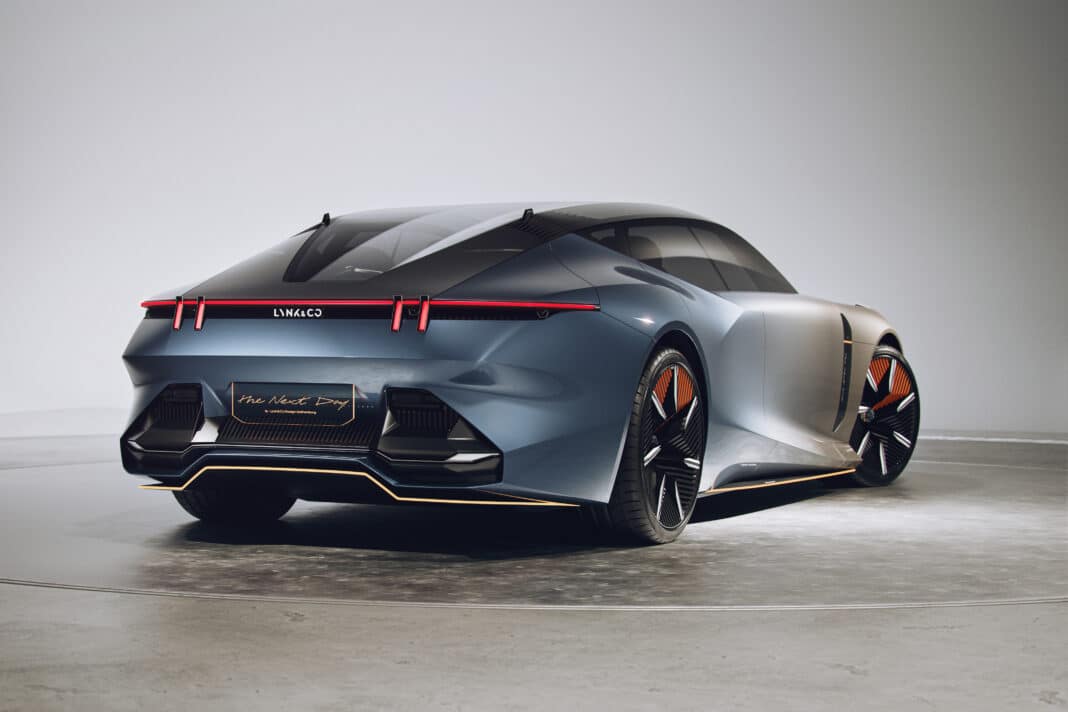 Lynk & Co, the hip, young subsidiary of Geely Auto, has launched their futuristic new concept, aptly called ‘The Next Day’.

The concept ushers in a new era of design for the brand which has until now maintained a strong family look across all models.

Rather than the broody, dark feel of the inner city, ‘The Next Day’ moves towards a lighter, more open look with a focus on technology.

‘The Next Day’ represents an evolutionary step for the brand which has proven successful since its inception just six years ago when it became the fastest-selling new brand globally.

The car chosen to express that new dynamic is a bodystyle not yet used by the brand, that of the four-seater grand tourer, similar in stature to the Zeekr 01.

It boasts a dramatic look, one characterised by muscular proportions with sharp lines that cut through the metallic body.

Even more expressive are the active bodyparts. These include dual scissor-suicide doors on each side that flail outwards like butterfly wings revealing a stunning cabin.

Despite the new look, ‘The Next Day’ is still clearly a Lynk & Co. The trademark lightbar across the back and twin vertical light strips atop the bonnet see to that.

The lightbar at the rear is split by pairs of vertical lights that move as the rear spoiler lifts up. Underneath, another Lynk & Co logo is revealed in a movement the brand calls ‘aerodramatic’.

At the front, more movable parts reveal the tech elements built into the car with a horizontal bar sliding away to reveal lighting, LiDAR, and digital sensors.

There’s also a sharp vertical grille at the front. This cools the inner working elements, while at the side a ‘tech totem’ hosts further sensors and lighting elements.

Inside, ‘The Next Day’ features an interior awash with blue, a nod to the youthful audience the brand targets.

A handwoven ‘sunrise’ carpet changes colour from front to back, mirroring the colour transition used on the outside surfaces of the car, where the dark of night at the rear blends into the lightness of sunrise at the front.

The upholstery is made of a dark blue velvet. This aims to give a deep luxurious feel reminiscent of old French cars with big comfortable seats.

In the front, these ‘zero-gravity’ seats are adjustable and can recline fully during autonomous driving. The rear seats, on the other hand, seem carved from the bulkhead for a deep bucket seat feel.

At the front, tech plays a major role in the driving experience, with the largest possible 3D holographic heads-up display projecting onto the huge glass dome roof that looks like a ‘black diamond’. A single piece of glass makes up the entire roof section.

Across the dashboard, a large widescreen display presents information and entertainment when driving manually, disappearing back into the dashboard when autonomous mode is in use.

Throughout the cabin, the designers have made use of a wood-denim blend material which gives a richness of texture. It’s also possibly the first time we’ve ever seen denim in a car.

With this new look, Lynk & Co is making its first design language shift since launch in 2016.

It revolves around four principles: Dare to be Different, Proud Tech, Next Premium, and Rich Experience.

Dare to be Different intends to show the brand’s confidence and desire to forge its own path.

Proud Tech is about not being shy of expressing your abilities, of which ‘The Next Day’ seemingly has many.

Next Premium describes how the brand wants to find new ways to express quality, with the wood denim blend and velvet seats being strong examples of this.

Finally, Rich Experience is about adding brand flavour, the unique identity that Lynk & Co holds in the wider Geely Auto Group and its young audience.

Lynk & Co has so far stayed away from the fully electric crowd, instead opting to focus on hybrid models, and ‘The Next Day’ sticks to that line.

Their solution is to mate an engine with high thermal efficiency driving the front wheels, to electric motors on the rear axle which drive the rear wheels.

This gives two drivetrain options. The first is a HEV, a hybrid electric vehicle. These run on normal fuel most of the time and use a small battery, which the engine charges, to add extra power during heavy acceleration or drive fully electric at low speeds.

The second option is a PHEV, or plug-in hybrid, which uses a larger battery, charged via an external source. This gives a longer period of electric-only driving and can combine with the engine for all-wheel drive and higher performance.

This launch mode can help cars accelerate faster from a standstill, or during 80-120km/h overtakes, much like a turbo does so well on a Saab.

With this, the 0-100 sprint is complete in under 5 seconds. Pretty impressive.

A Busy Year for Lynk & Co

While we’re not expecting to see ‘The Next Day’ anytime soon, Lynk & Co did reveal that another four smart hybrid models will see their launch this year, with three more in the next two years.

We do have signs that one of them will be an MPV, which would be an all-new model, while others are likely to be hybrid versions and updates of existing models.

All Lynk & Co models will be hybrid by 2025, so keep your eyes on these pages for information as it happens!