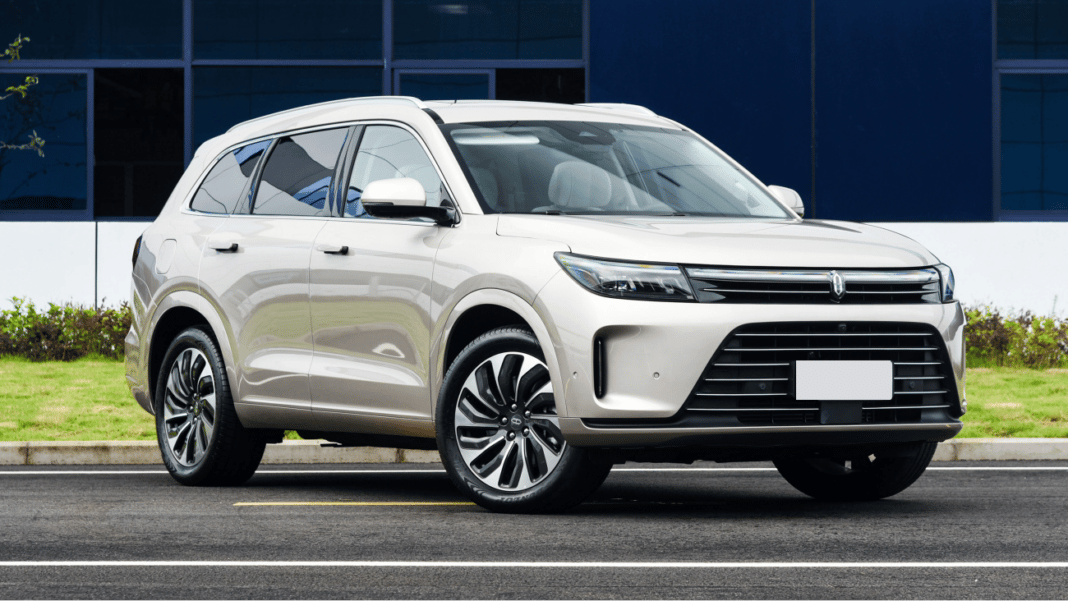 The AITO M7 was launched today in China. It is a full-size EREV (range extender) SUV with six seats. Its top trim level has two electric motors with a combined output of 449 hp and 660 Nm. As for the starting price of the M7, it is 319,800 RMB (47,780 USD). Curiously, during the AITO M7’s presentation there were plenty of comparisons between the M7 and BMW X7, Mercedes-Benz GLS, and Li Auto L9. Let’s get acquainted with AITO’s flagship.

AITO is a high-end brand that Seres (Sokon) and Huawei run jointly. Their story of friendship began in 2021 when Huawei started to sell the Seres M5 SUV in the Huawei stores. Later, the AITO was founded. This brand’s name is an acronym that means ‘Adding intelligence to an Auto’. In this joint brand, Huawei supplies ‘brains’ and some other parts, and Seres takes care of manufacturing. Worth mentioning that Seres fully owns AITO and Huawei hasn’t got any shares in it. The first AITO vehicle was the AITO M5, launched in February 2022. And now the time has come for the second model.

The AITO M7 is a full size SUV. Its dimensions are 5020/1945/1775 mm with a wheelbase of 2820 mm. So it’s not a very big car with a comparatively short wheelbase. For example, the Li Auto L9 is 198 mm longer, 53 mm wider, and 25 mm higher than the AITO M7. Moreover, the L9’s wheelbase is 285 mm longer than the M7. It looks like the more accurate competitor to the AITO’s flagship is the Li Auto One, but they’ve decided to compare it with the huge L9, and other massive cars like BMW X7 and Mercedes-Benz GLS.

As for the exterior design, the AITO M7 mostly doesn’t stand out from the crowd. Its front end got two separate headlights and an LED strip between them. As it is a range-extender, the M7 has a big grille. From the side, we can clearly see that the M7 is a traditional SUV. But it has a small sporty touch which is a roof spoiler. Worth mentioning that door handles of the M7 are electrically retractable. Its rear end is the most interesting, mainly because of a large LED taillight unit.

As for the exterior colors, this SUV got five base colors and one special. Most of them got quirky names. Base colors: ‘Deep Space Ash’ (Gray), ‘Gilded Black’ (just black), ‘Ceramic White’, ‘Mist Gold’, ‘Frost Folk Green’ (just green). As for the special color, it is ‘Azure Blue’.

In general, the AITO M7 has got the look of a typical 6-seat SUV. But since its design is clear and simple, the M7 looks fine.

The center console of the AITO M7 looks nice with some wooden and gloss black trim. The main screen of the M7 has a diameter of 15.6 inches. As for the instrument panel, it is 10.25-inch. Other features of the M7 include two wireless phone charging pads, a diamond gear shifter, and a sporty steering wheel with a flat bottom. Let’s get back to the main screen for a second. Its main feature is the HarmonyOS system from Huawei. Its main benefits are a video calls possibility, the voice assistant and a big apps ecosystem.

Huawei also provides a stereo system for the AITO M7. It is simply called ‘Huawei Sound’ and it has got 19 speakers and 1000 W of power.

Worth mentioning that the second row of the M7 got heating, cooling and massage functions as standard. As for the colors, there are four shades: ‘amber brown’, ‘polar night black’, ‘spring apricot’ (light brown), and ‘ivory white’.

The M7 has got an H15RT 1.5-liter four-cylinder turbocharged petrol engine with an output of 92 kW (125 hp). The ICE only powers the battery as the M7 is a range-extender. There are two versions of the M7. The first one goes with a single electric motor on the rear axle for 200 kW (272 hp) and 360 Nm. The second has two electric motors with a combined output of 330 kW (449 hp) and 660 Nm. Worth mentioning that Huawei makes the M7’s electric motors.

According to AITO, the M7 RWD will be able to speed up from 0 to 100 km/h in 7.8 seconds. As for the AWD, its zero-to-hundred acceleration time is 4.8 seconds. And once again, AITO compared the M7 with some German cars and the Tesla Model Y. Moreover, AITO claimed that the M7 passed the Moose test at 74 km/h, which is once again better than the results of the X7, the GLS, etc.