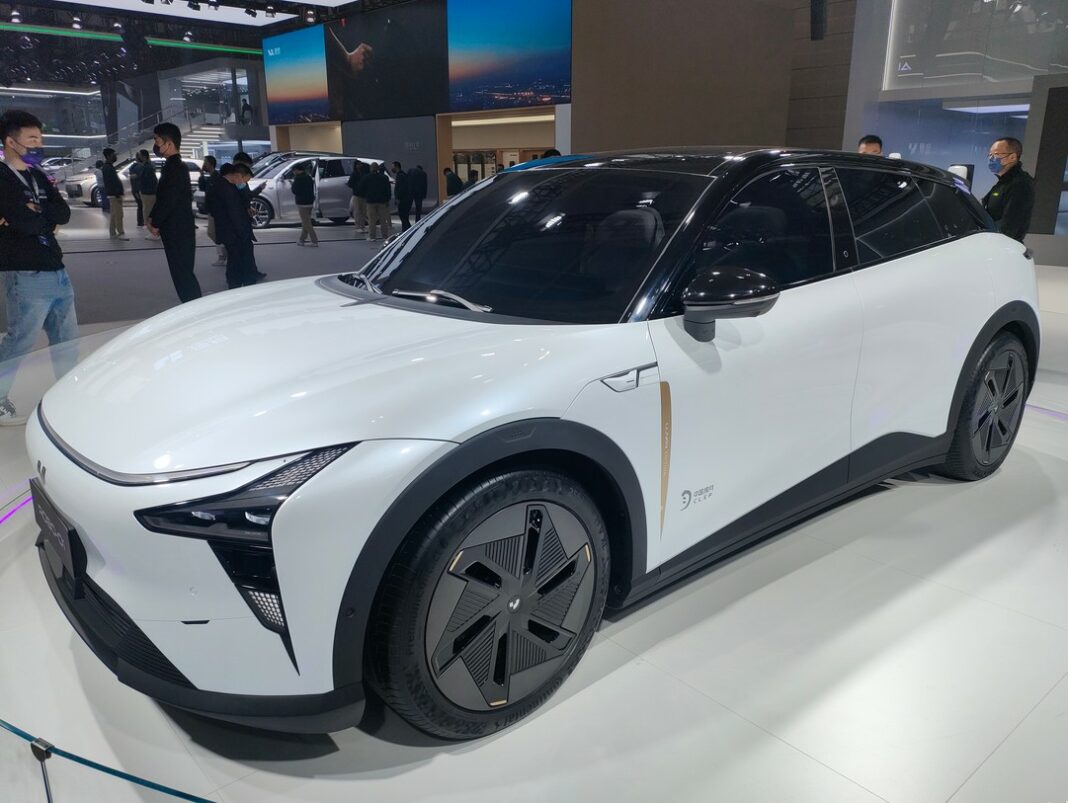 The Jidu Robo-01 Lunar Edition is pretty on display at the 2022 Tianjin Auto Show. The Robo-01 is probably one of the most interesting new Chinese electric cars unveiled this year. Jidu is a new Chinese automotive brand. It is a joint venture between Chinese tech giant Baidu and carmaker Geely Holding Group.

The Robo-01 has a super slippery body with a drag coefficient of just 0.249 Cd.

The cars will be manufactured in Ningbo, Zhejiang province, where Geely has several plants. The platform is developed by Geely and the batteries are from CATL.

No matter how impressive the screen may be, I cannot get over this: the screen doesn’t extend to the left side of the cabin, or even to the left of the yoke. It only extends to the center of the yoke. So a driver looks straight at the edge of the screen. The driver’s eyes will be out of focus! Weird.

The yoke has two slider buttons and two captive buttons for the lights and windshield wipers. The audio system comes from Beats Electronics. The various systems run on a Qualcomm Snapdragon™ SA8295P Automotive Cockpit Platform with 30 TOPS computing power.

The autonomous-driving platform is Baidu Apollo, provided, of course, by Baidu. The car has 31 external sensors and two Lidars. The chip for autonomous driving is a NVIDIA Orin X. Jidu has released a video showcasing some of the autonomous capabilities. Jidu calls these caabilities PPA, which stands for Point to Point Autopilot.

The front seats are called ‘Moon Gravity Seats’, and that is a cool name.

The Robo-01 Lunar Edition is limited to 1000 units. It is a new car from a new brand. So why is it a limited edition? Because launching new cars with a special edition first followed by the standard edition is a new trend on the Chinese car market. Avatr did the same thing: first a special edition, then the base car. Jidu will do this too. The Lunar Edition is basically a PR stunt, and it works very well, generating lots of media attention. The Lunar will hit the Chinese market in early 2023. Some six months later, the base model will follow, creating yet more public attention.

The Lunar Edition is a co-branding project with the Chinese Lunar Exploration Program (CLEP). This program includes all unmanned and upcoming manned missions to be moon. The program is overseen by the China National Space Administration (CNSA). In its marketing, Jidu emphasizes the connection with space, using a cool 3D computer-generated lady called Xijiajia. This lady will also work as a virtual assistant in the Robo-01, just like Lil KiWi over at Baojun.

The new Jidu Robo-01. An interesting car with great looks and proper power. But that screen situation lets it down a little bit.