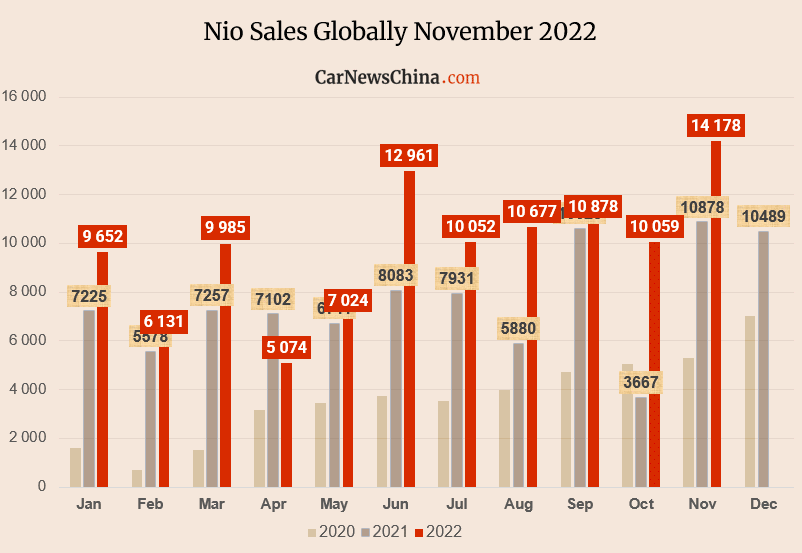 The deliveries consisted of 8,003 SUVs, including 4,897 ES7s (EL7s), and 6,175 sedans, including 3,207 ET7s and 2,968 ET5s. The company stated in the press release it plans to further accelerate production and delivery in December 2022. Deutsche bank estimates that Nio will deliver 19,500 vehicles in December. The bank’s estimates for November deliveries were 13,500 vehicles, so we can assume Nio will enter the 20k club in December.

Nio dealt with supply chain and operational issues in October and continuing lockdowns in China. Based on deliveries, the operational problems were solved in November, and with the easing pandemic restriction, the December delivery estimates will probably be modified.

Nio pushed hard for overseas expansion in October, entering four EU markets at once and hitting US entry in 2025. The company also announced that in H1 2023 would launch five new models, and one of them could be the EU-destined ET5 station wagon, which was recently caught in the wild in China.

In the EU, Nio offers a lease plan for all the vehicles, meaning you don’t own it and only subscribe to it. How does it count toward monthly deliveries? Nio answers: “The vehicles under Nio Subscription in Europe are recognized as assets on Nio’s balance sheet but not counted towards the announced delivery volume.” Nio doesn’t publish the subscription data so the total deliveries might be a bit higher, but we don’t see it.

Until 2025, Nio plans to expand its business to other sectors. As reported earlier, four main directions will be codenamed NB (New Business) 1-4.

On November 21, Nio announced ET7, ET5, and EL7 (ES7) prices for Germany, Netherlands, Sweden, and Denmark. It was also a direct entrance to the home market of Nio’s main competitors – BBA (Benz, BMW, Audi). Nio aims for the premium segment, so the final EU prices were highly anticipated. The first deliveries of ET7 have already started in Europe.

On November 28, Nio and Tencent entered a strategic cooperation to deepen their partnership further in autonomous driving and related cloud services and intelligent driving maps.

We will keep an eye on the new December delivery estimates data.