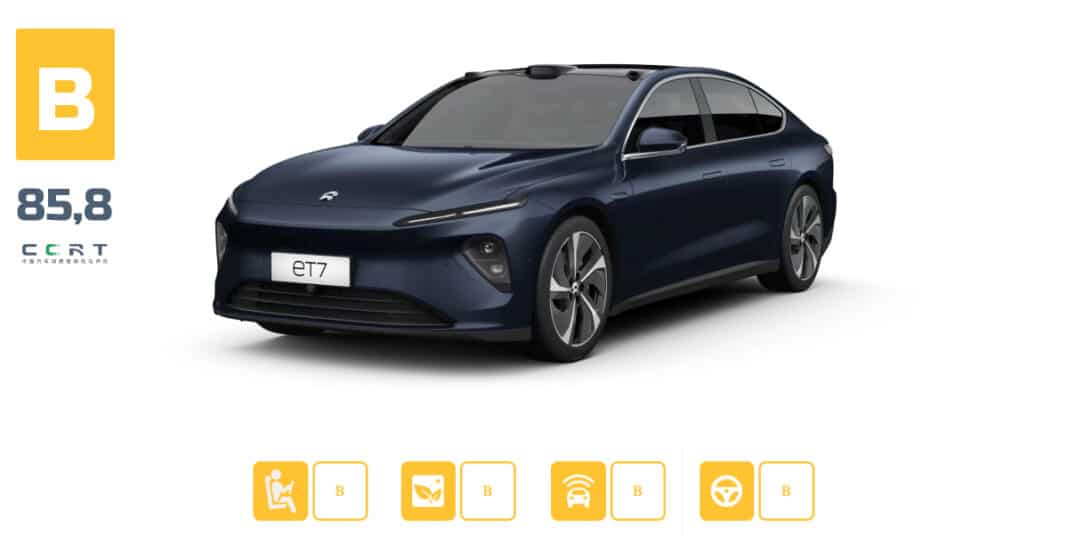 The tested model was ET7 with a 75 kWh battery. There are five segments CCRT focuses on, and each is awarded 0-100 points.

Let’s have a look at how ET7 performed in each of those tests.

ET7 received 86.3/100 points (grade B) in passenger comfort. This test considers the noise in the car, electromagnetic protection, interior air quality and fluctuation. Worth mentioning that in the testing of internal noise, ET7 got full 100/100 points – when traveling 60km/h, the noise level is about 50.8 dB. This result ranks in the top 20% of all models CCRT ever tested.

Among the five tested segments, this is the only one where ET7 is below the average of all tested cars. The reason is most likely the unsatisfactory performance in low temperatures.

ET7 got 87 points. The overall score is calculated base on four variables:

ET7 got 87 points overall. During the performance testing, the car reached the highest score in terms of acceleration (93 points) and the lowest in comfort (84 points). For braking performance, it got 86 points, and the car’s stability got 90 points.

Nio ET7 started deliveries in China in March 2022 and in December 2022 in some European countries. In Europe, it won several awards in a short time, especially Golden Steering Wheel in Germany and Car of the Year in Sweden. In Germany, ET7 75 kWh costs 81,900 EUR, and in China, it costs about 62,000 EUR.

CCRT does testing Chinese automotive products since 2018 and follows strict guidelines. For example, the tested car is always bought anonymously at a random dealer with the agency’s money – so no gifts from the PR team, favors, or unlimited free leases, as you can see recently with many car reviewers. CCRT only tested models launched within a year and reached monthly average sales of over 3000 units.