Eye to Eye with the Shenghao Q5 electric tricycle in China 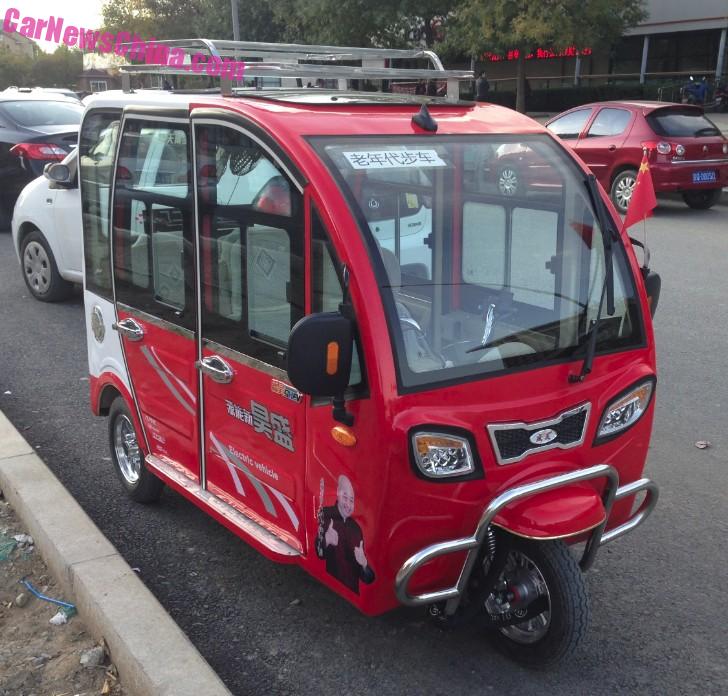 This is the beautiful Shenghao Q5 electric tricycle, Spotted in China in the Dongba area in the far eastern suburbs of Beijing. The vehicle looks all the business, painted in bright red and some white, with a lot of shiny chrome parts, side bars, stickers of all sorts, a bull bar, and a roof rack.

The stylish grille with the Shenghao badge in the middle.

The Shenghao Q5 is so called ‘low-speed electric vehicle’ (LSEV) from China. They can only ride inside the city and usually can’t go faster than 45 kilometer per hour. The exact rules for having and using an LSEV differ per city. In Beijing, the official rules say LSEV’s can only be bought by the elderly and the disabled. However, in reality almost everybody can buy one these days, especially in the lawless lands outside the Fifth Ring Road where Dongba is. 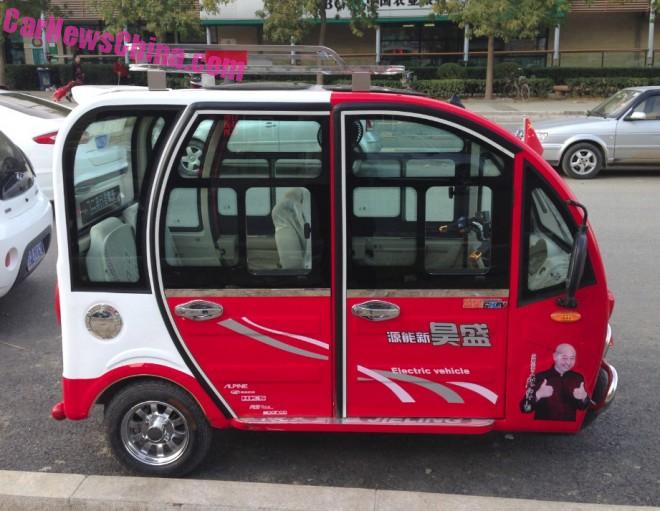 The Shenghao Q5 is a rather large tricycle LSEV, with four doors and four seats. Huge windows for an airy feeling. Door handles and fuel cap in chrome. All this fine stuff comes standard.

The Shanghao Q5 is manufactured by a company called Jinxiang Qianyuan Electric Vehicle Corporation (web), based in the great city of Jinxiang in Shandong Province. Shenghao is the brand name for a wide range of electric tricycles. Price for the Q5 starts around 7000 yuan ($1096), depending on province, depending on local rules, depending on competition. 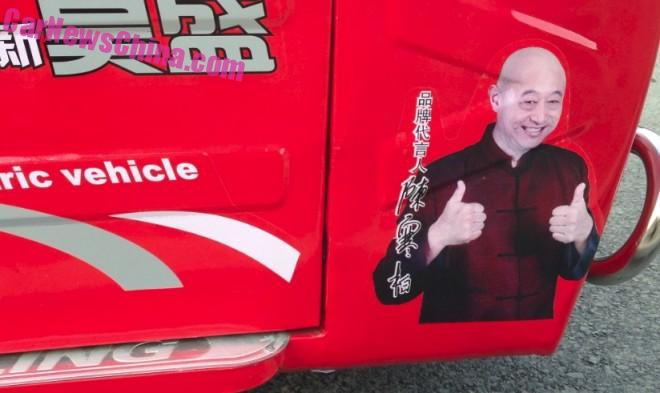 This bald man is Chen Hanbai, a famous Chinese comedian. He is the brand’s ambassador so he got his sticker on the front fender. 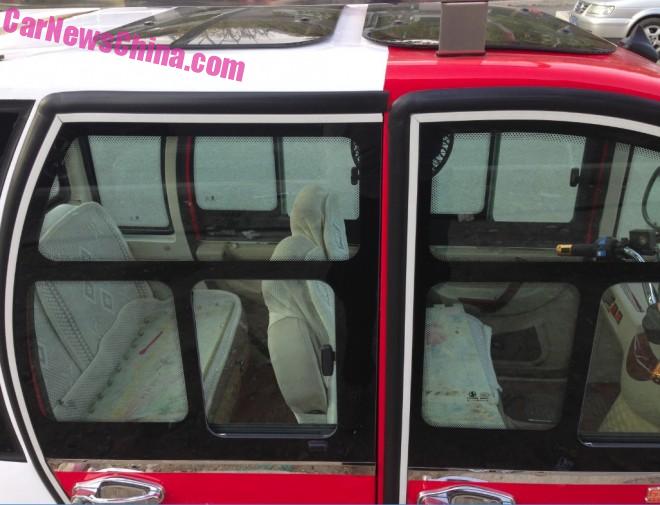 Bench in the back and two seats in the front. The driver’s seat is on the right (!!!), and positioned slightly in front of the passenger’s seat. Normally, the wheel is on the left in China, as cars drive on the right. Double sunroof for even more air in the hot Beijing summers. 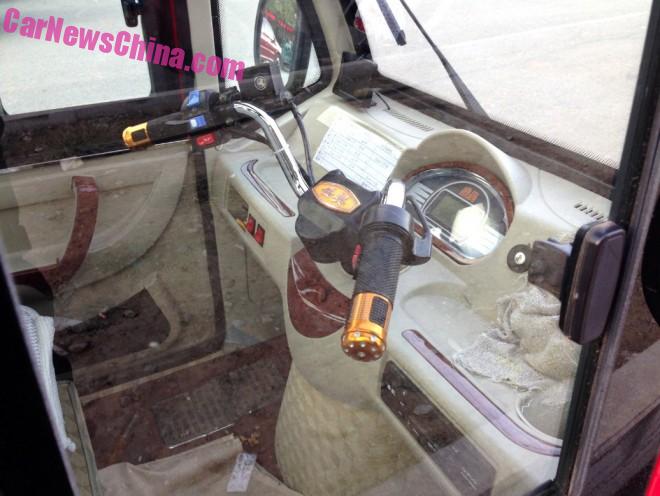 The dash with a tricycle handlebar steer with shiny gold knobs at the ends. Plastic wood on the doors and dash. Impressive radio unit has USB connectivity for playing the iPhone. 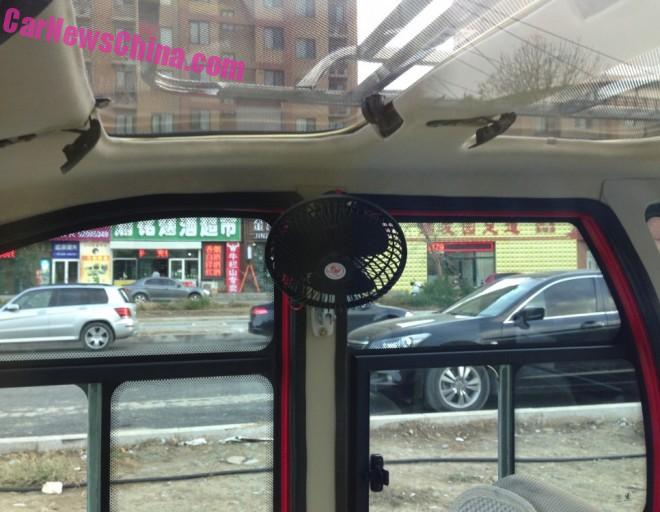 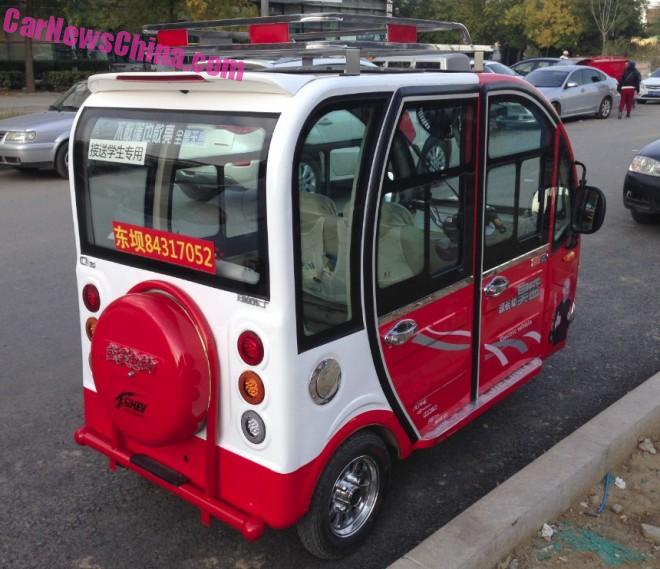 Racy shiny alloys, triple round taillights, a big red spare wheel cover, and a real spoiler with third brake light on top of the rear window. Need spoiler for downforce, to keep those wild 1.07 horses on the road. Roof rack empty here, but I have have seen them going go with all kinds of stuff, up to a meter high or more, wobbling around dangerously. 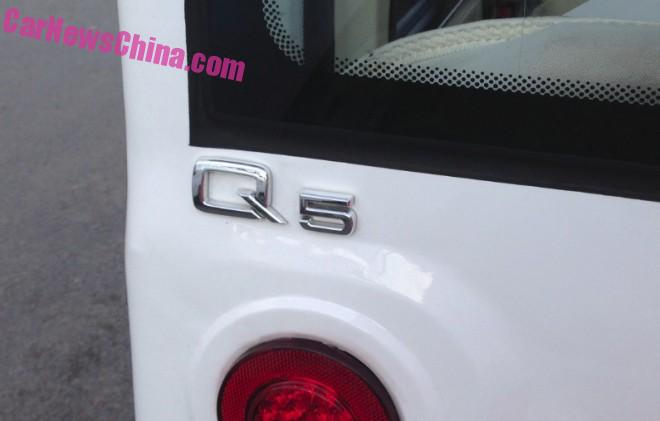 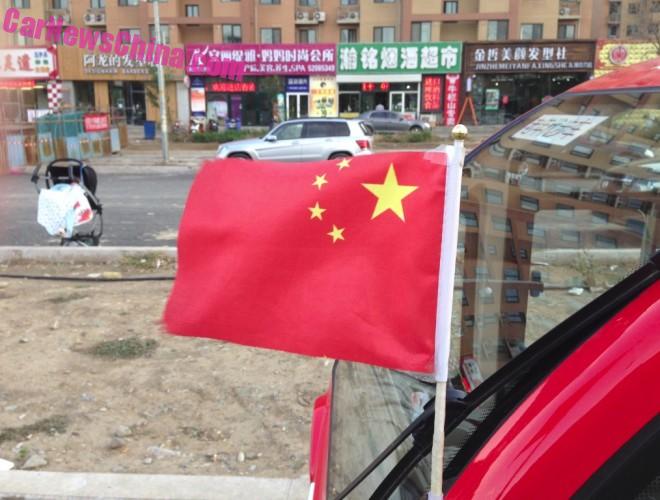 Showing the flag. See that stroller on the left? That’s my five month old in there. He was crying and shit, but he really had to wait until I was done with the Shenghao Q5. When I work I am dedicated, not dad-icated.