A slightly sexed up Beijing-Jeep Cherokee 2500 in China 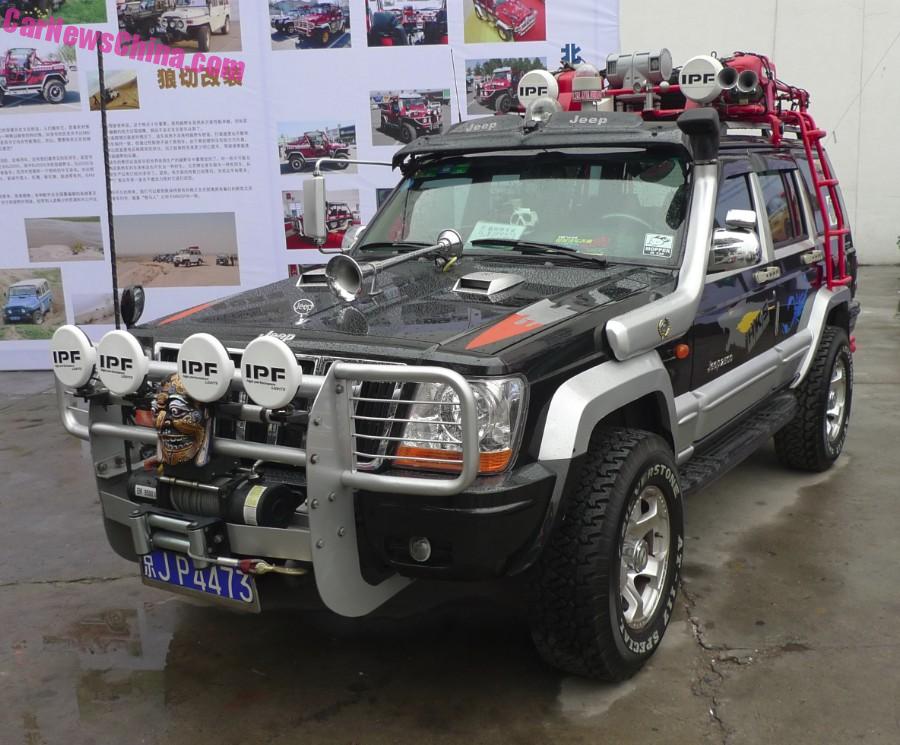 A slightly sexed up Beijing-Jeep Cherokee 2500, seen on a local tuning show in Beijing. The good Jeep is modified to an impressive extend. Let’s start: a shiny license plate frame, a giant bull bar, a native-American mask on the bull bar, four search lights on the bull bar, a winch, the chrome grille is standard, an extra mirror on the right fender, gray panels on the fender tops and sides, a snorkel, a Jeep hood ornament, a large horn on the bonnet, fake air ducts on the bonnet, a snorkel, a sun visor (official factory option), a red roof rack, cameras and search lights on roof rack, a red ladder leading to the red roof rack, gray window frames, gray door handles, shiny mirrors, side bars (official factory option), fancy stickers all around, and extra large tires with shiny chromed alloys. 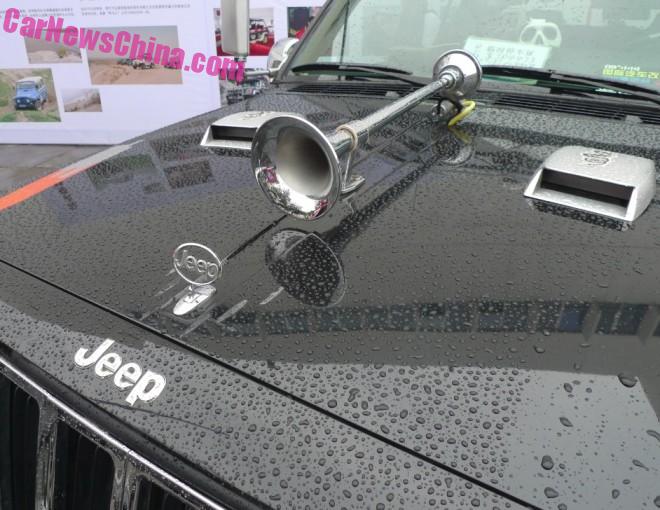 The horn was fully functional. Note yellow wire at the back of it. The horn was demonstrated later on, when I was about twenty meters away. It was very loud. The Jeep badge is original. The ornament is not. The Cherokee 2500 was a variant of the Beijing-Jeep Cherokee XJ. It came with a new grille, new headlights, and an updated interior. 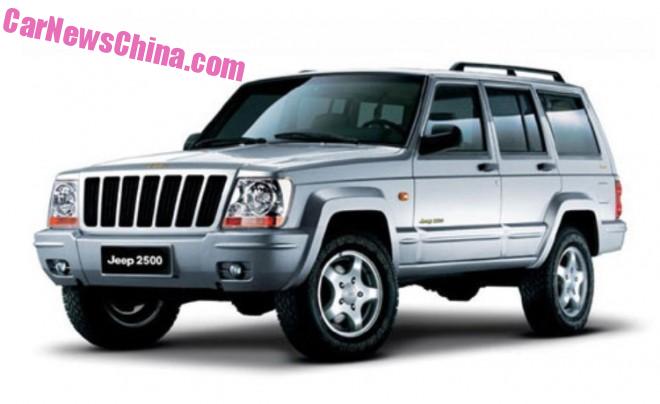 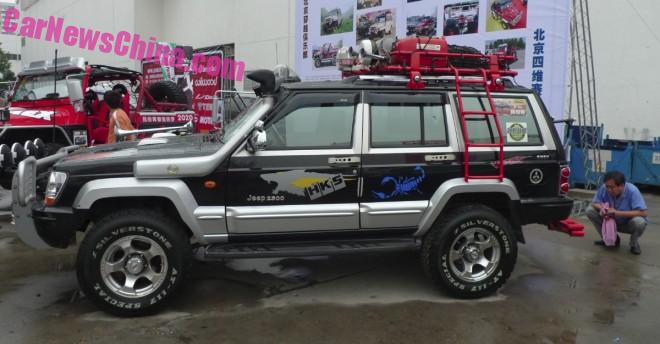 Jeep 2500 badge on the door is standard. Sun visors on the side windows were a factory option. Man on the left is studying the exhaust pipe system, about which more later. 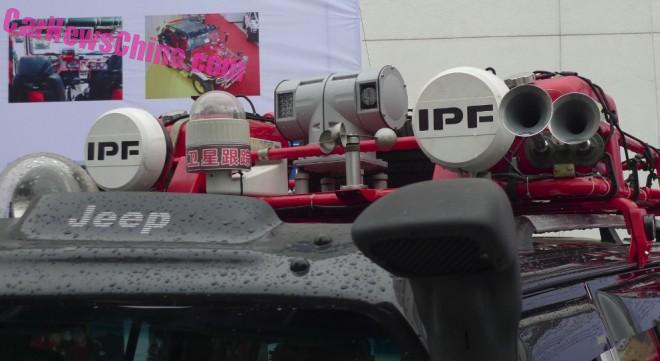 The camera in front, to the right of the left IPF, is a simply thing often seen in shops. The other camera however, located in the center and the center of the photo, is a military-spec bitch that normal citizens normally can not buy. These cameras are mostly installed on police and anti-riot vehicles. To the right of the left IPF sits a device for measuring wind speed, which won’t measure much considering its location. 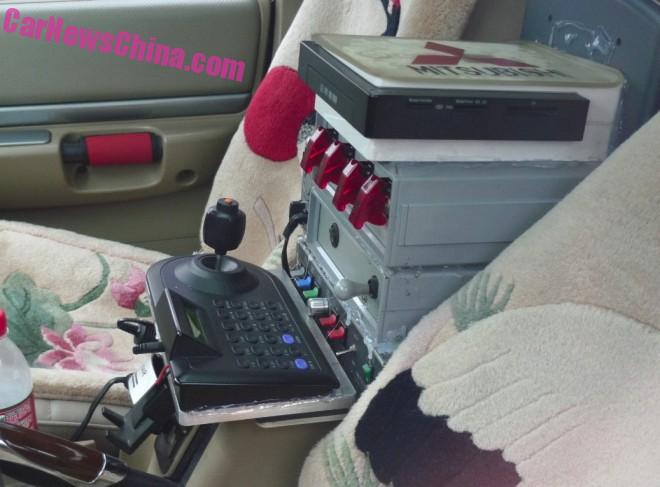 The control panel for the camera. 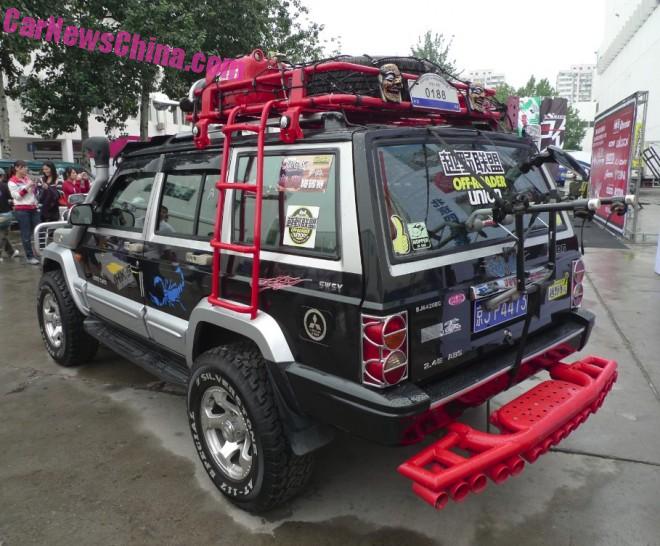 Black net over the roof rack, window frames all gray, more speedy stickers, and trendy taillights covers. The best thing however is red. It is fitted under the bumper and sticks out for about 30 centimeter. It consists of a frame with a small platform in the middle, and 16 pipes underneath, resembling exhausts. Absolutely brilliant. 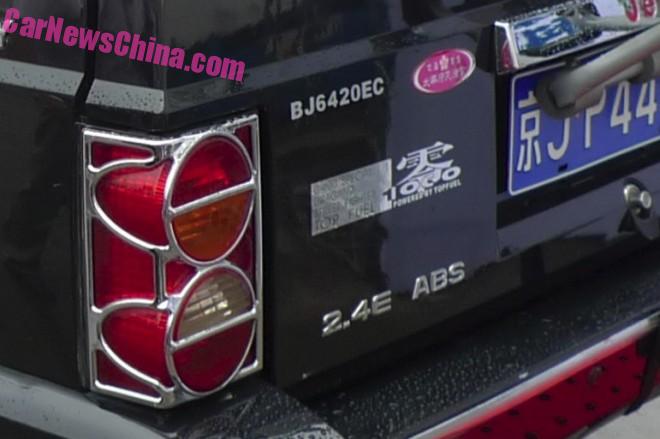 BJ6240EC is the official factory designation, which in those days was printed in full on many vehicles, in badge or sticker form. Today only smaller pickup truck makers and commercial vehicle makers stilll do this. The engine is the 2.4, and it was equipped with ABS. That is significant because the base China-made Cherokee was not. 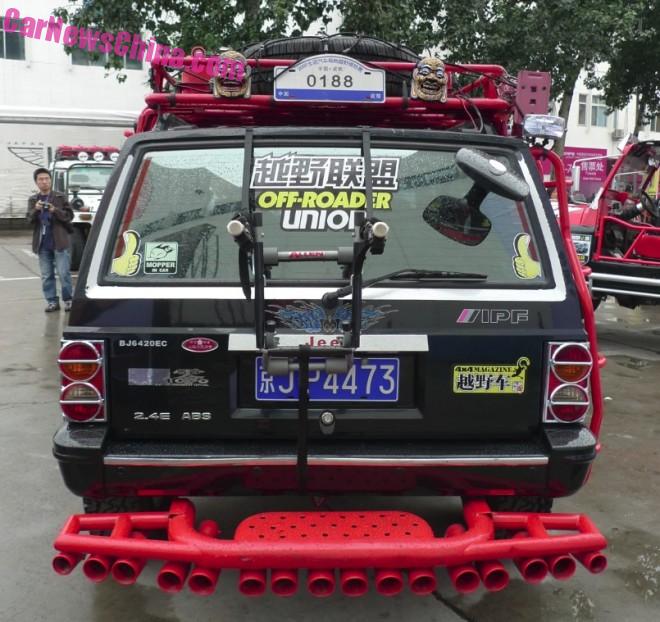 Exhaust pipes! Two more freaky masks on the roof rack, big mirror on the window, and a red Jeep badge on the chromed bar above the license plate. Normally this bar was in body color. The rear bumper is standard. 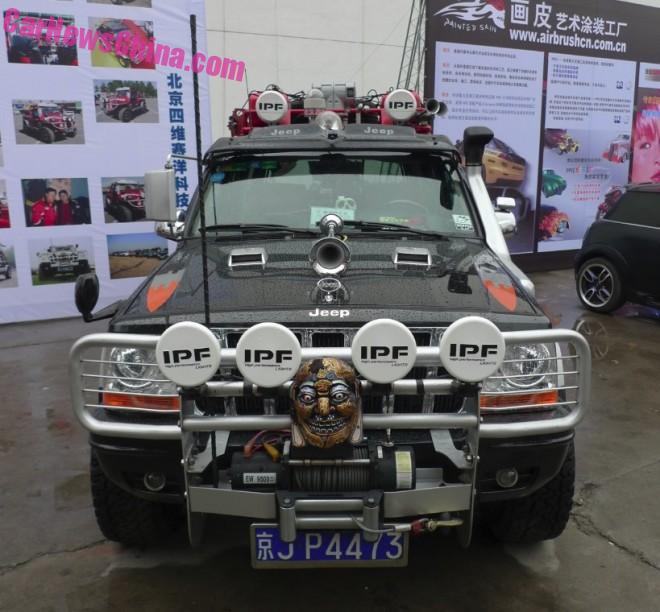