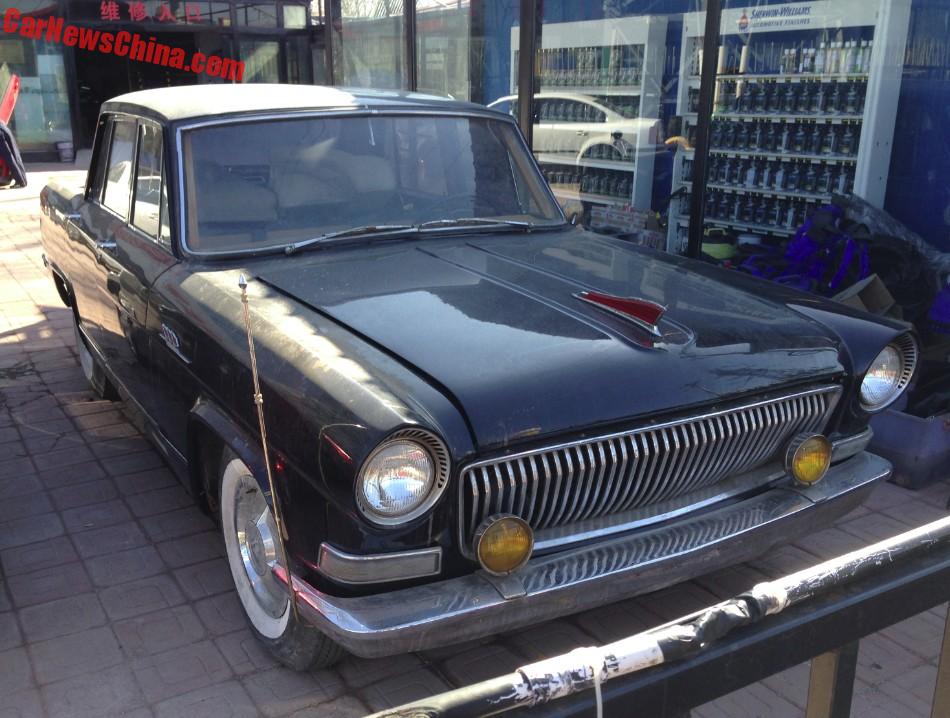 An incredible beautiful black Hongqi CA771 sedan, Spotted in China at a car repair shop in Shunyi District, with many thanks to reader Maxi for showing me the way. It is very rare to meet a Hongqi in the wild like this. Most are now locked up in museums and private collections.

The headlights are a work of art with ‘vents’ around the light. The two lowest vents are heart shaped. Flag pole on the left indicates this was once an official government car.

The Hongqi CA771 is a short-wheelbase variant of the more famous Hongqi CA770 state limousine. It has only two rows of seats where the CA770 has three. It is 65 centimeter shorter than the CA770, but still a huge car with a length of 5330 and a wheelbase of 3070.

The CA771 was built from 1967 until 1971. It was intended to be a more affordable Hongqi for lower-level government entities and state owned companies. In those days there was virtually no private car ownership. Sadly the CA771 did not become the success Hongqi had hoped for, only 129 cars were made in the four years of production. Earlier on we met one in museums in Beijing and in Dalian.

Power comes from a massive Chrysler-derived 5.6 liter V8 with an output of 215hp, mated to a two-speed (!) automatic gearbox. Top speed for the CA771 was stated as 165 kilometer per hour. 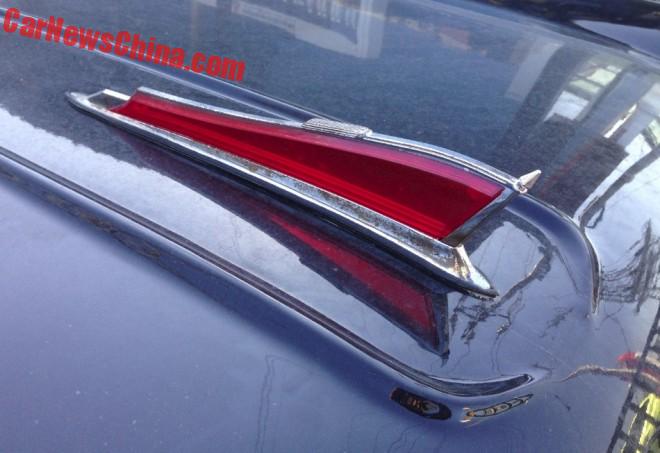 The Hongqi (‘Red Flag’) hood ornament. The red part is made out of a very hard plastic, the frame is made of metal. 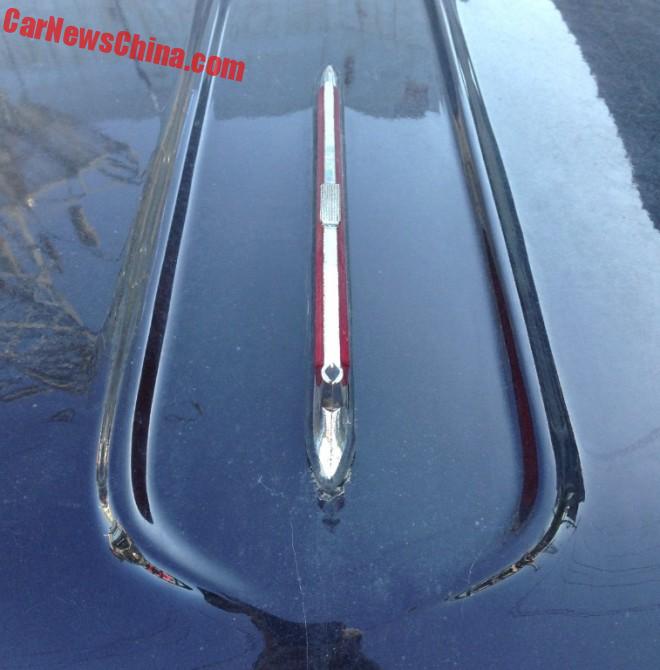 The hood ornament seen from above. 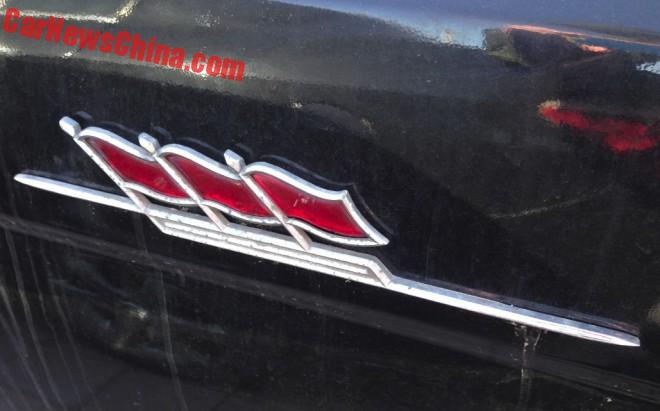 The three flag-badge on the front fender is a masterful work of art. The flags stand for: Socialist Construction, Great Leap Forward, and Peoples Commune, the three main government programs at the time. The frame is made of metal and the red flags of plastic. 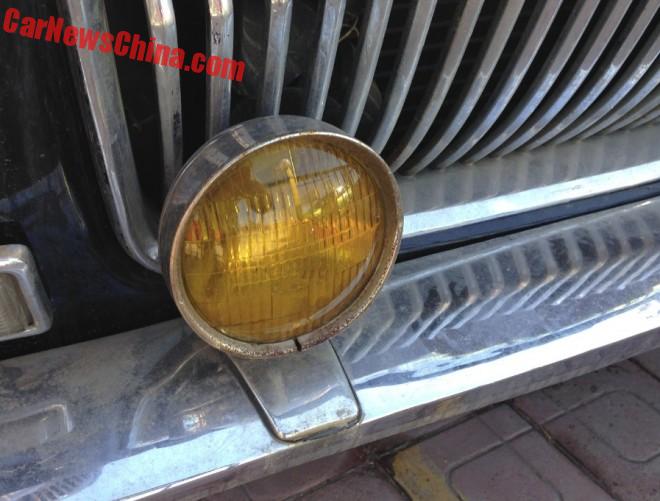 Most Hongqi’s had white fog lights, but some had yellow ones. Grille shaped like a waterfall. 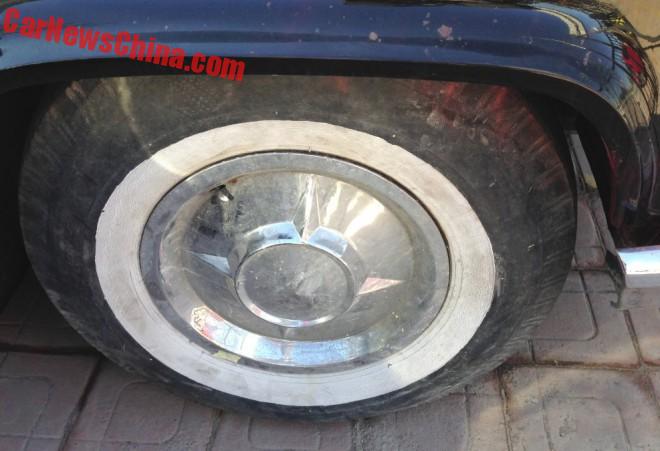 Original factory white wall tires are getting a bit old. 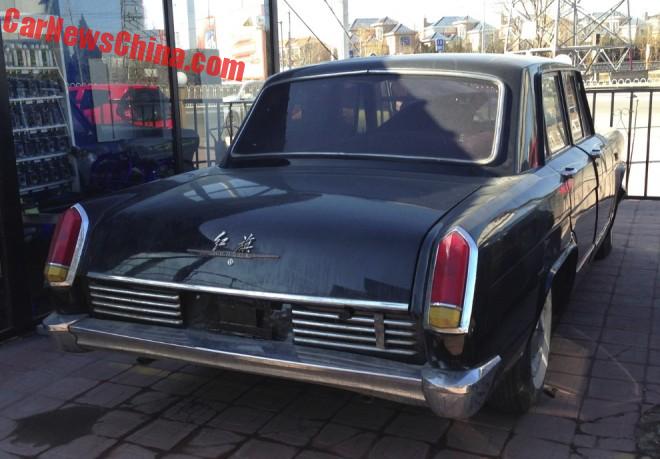 The entire body was in perfect shape. No dents or busts, no rot or rust. Note the thick chrome edge around the rear window! No plastics here like all cars have today, this shiny stuff is the real metal thing. 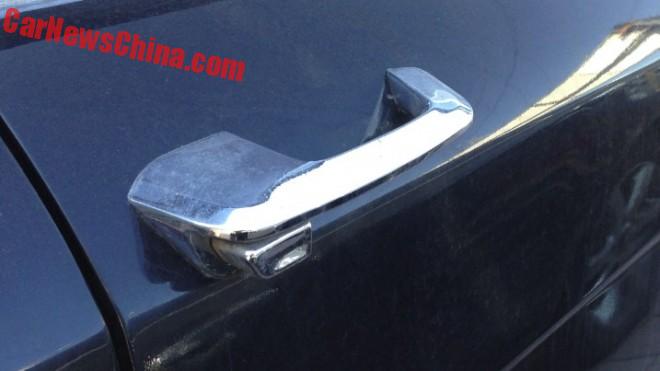 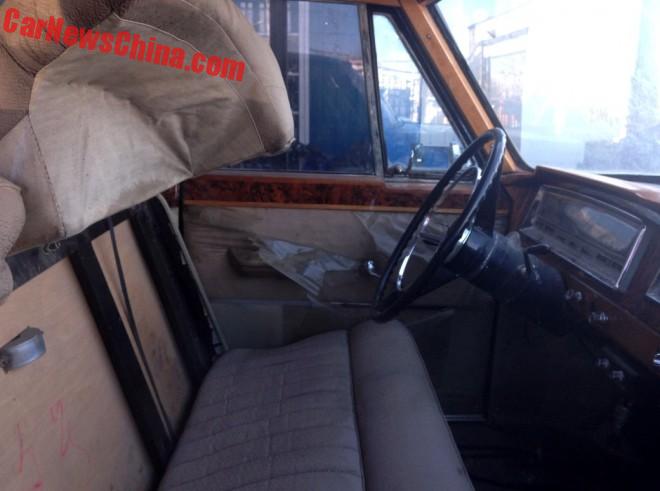 The interior was in dire need of a lot of work and love. The front bench had only the seats left, and the rear bench was a mess. The door panels were all loose and broken. Happily, the wood on doors and dash appeared to be in good shape. 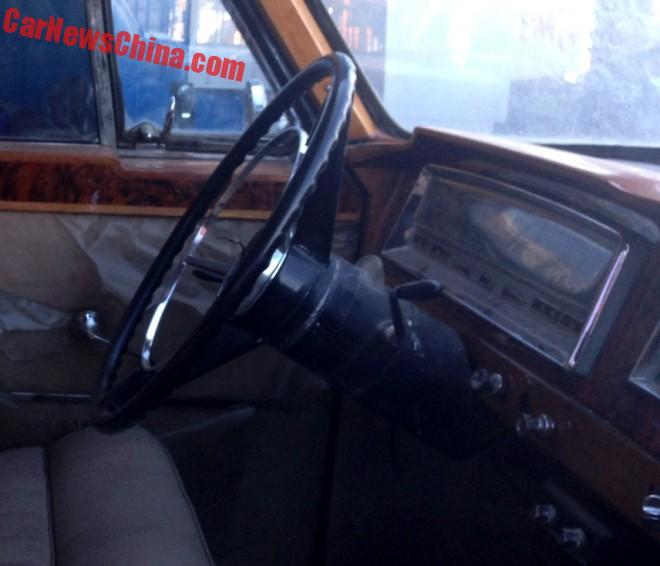 Large steering wheel with a thin rim. The shiny second rim doubles as the pull-to-front horn. Gear lever mounted on the right of the steering column. 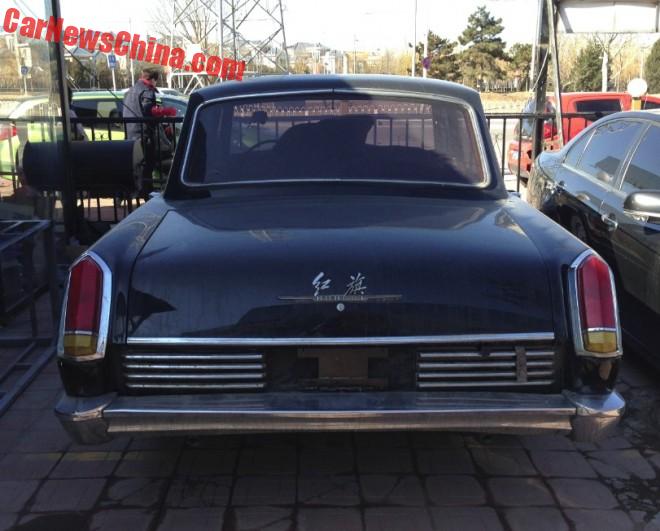 The massive rear end with loads and loads of chrome. 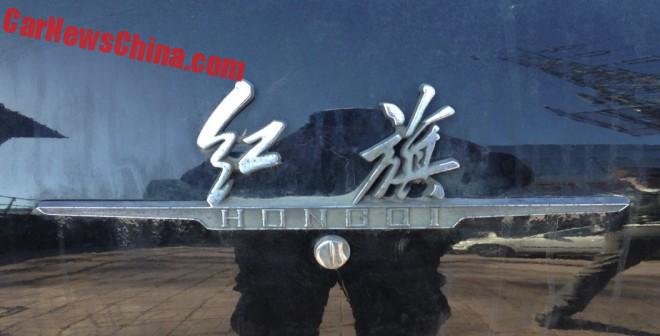 The incredible Hongqi badge on the boot lid. 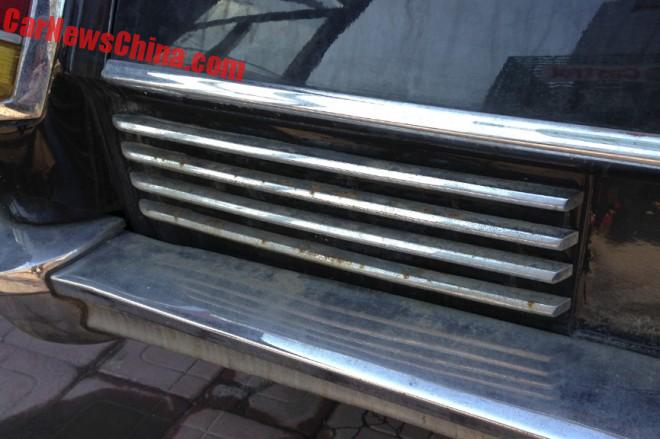 The four chrome bars on each side of the license plate area. 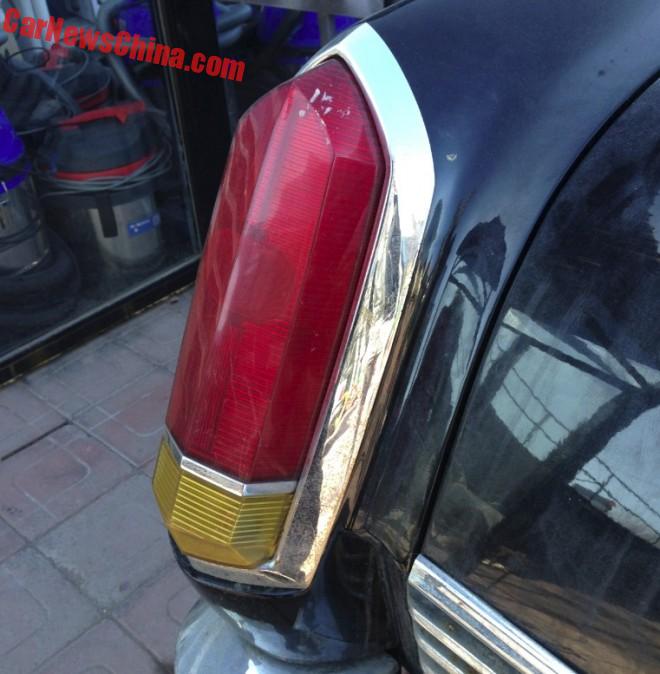 Taillights shaped like classic Chinese lanterns, naturally with another thick chrome frame around. 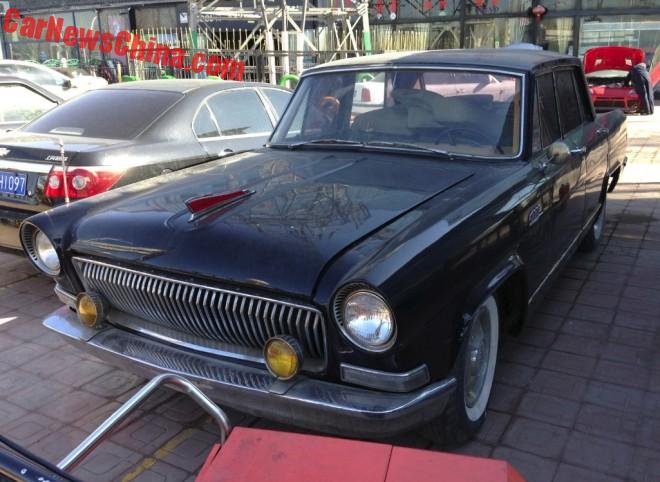 The spirit of the CA771 lives on until today with the Hongqi L5, the short-wheelbase version of the Hongqi L9 state limousine. 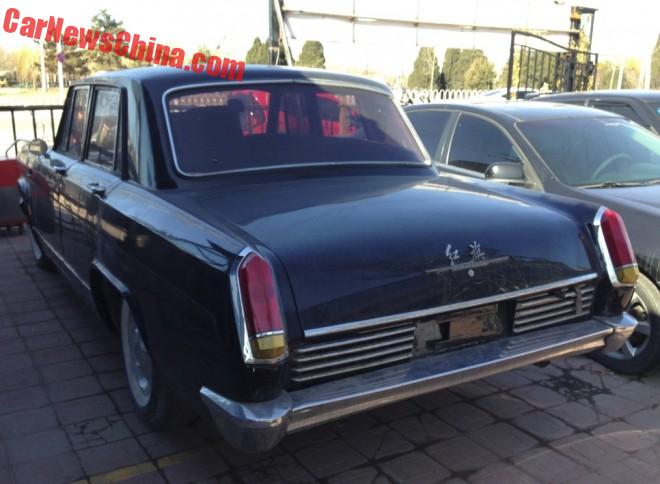 A majestic monument of Chinese automotive history. May her interior be fixed!