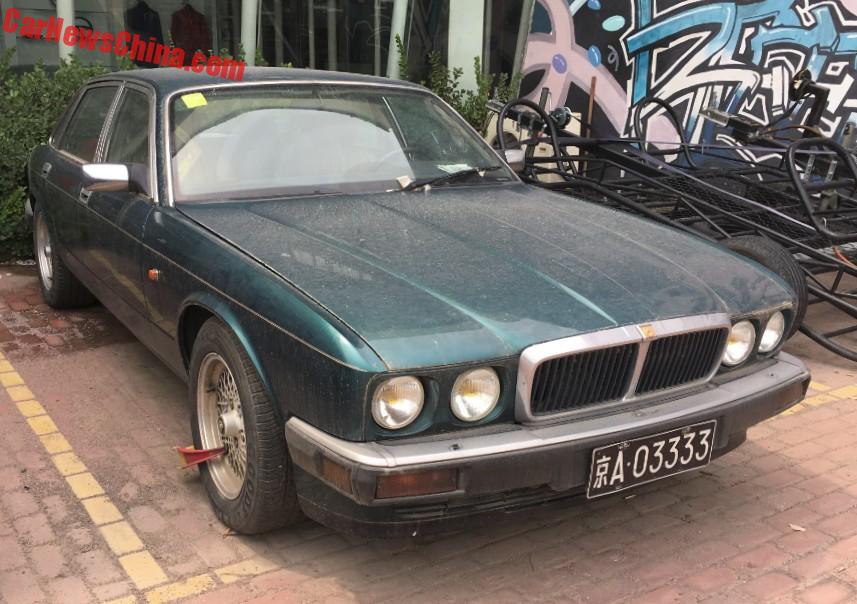 This is my Spot of the Year 2016; an ultra rare  XJ81 Jaguar XJ12 6 Litres painted in British Racing Green, Spotted in China at a car tuning shop in east Beijing. The good Jag’ was dusty and dirty but otherwise in a good shape; paint was smooth and chrome shiny, and I didn’t see any obvious rust or rot.

XJ81 was the designation of the V12 models of the Jaguar XJ40. There were two: this Jaguar XJ12 and the Daimler Double Six. Both were powered by a 6.0 liter (5993cc) V12 engine with an output of 322hp and 464nm. The massive engine was mated to a four-speed automatic, sending power to the rear wheels.

The XJ12 was made only for two years, from early 1993 until late 1994. It came with double round headlights, sporty wheels, and a gold ‘growler’ badge on the grille. The badge on this car is damaged a little bit but it still looks very impressive. 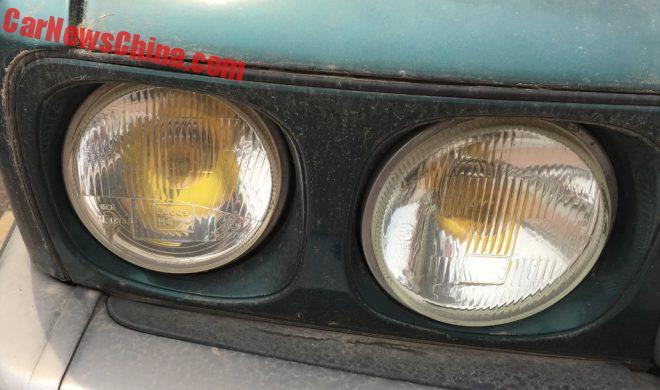 The car has an interesting history. It was imported from France in the early 1990’s by a foreign-owned company in Beijing. It was then sold on to a Chinese businessman who took it to Thailand for a couple of years. When it came back to Beijing he brought it to the shop for servicing and… left it there. I talked to the owner of the shop and he said they were still in touch with the owner, and that he was willing to sell the car for 200.000 yuan.

But a buy might not be a good idea. Beijing’s new environmental regulations don’t allow this car within the Fifth Ring Road, which is basically the entire city, and soon it will likely banned altogether. The same goes for other big-engined polluting cars like the W140 Mercedes-Benz S600 and the E32 BMW 750 iL.

The car has black license plate, supporting the history. Black license plates were issued to foreign owned companies from the 1980’s to the early 00’s. These companies could buy a car locally, and they were also allowed to import their own cars. In the old days black-plated cars had some privileges comparable to diplomatic cars; no police officer would dare to stop them and they could basically park wherever they wanted without fear of a fine. Nowadays, a black-plated car is counted just like all the others. The government does not issue new black plates anymore but those who have one can keep it until eternity.

The license plate on this car reads A·03333. That is indeed a possible sequence and the show owner swore it was a real plate.

The yellow headlights seem to confirm the French connection. Yellow lights were obligatory there until 1993. There is more: 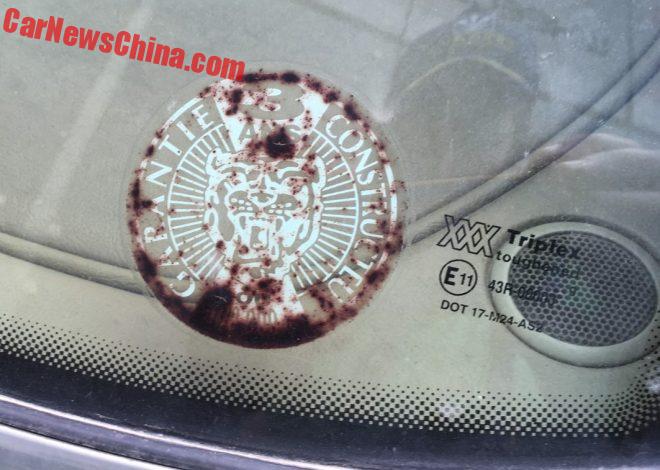 An old sticker on the rear windshield reading: Garantie Constructeur 3 Ans. That is French, best translated as “3 years manufacturers guarantee”. 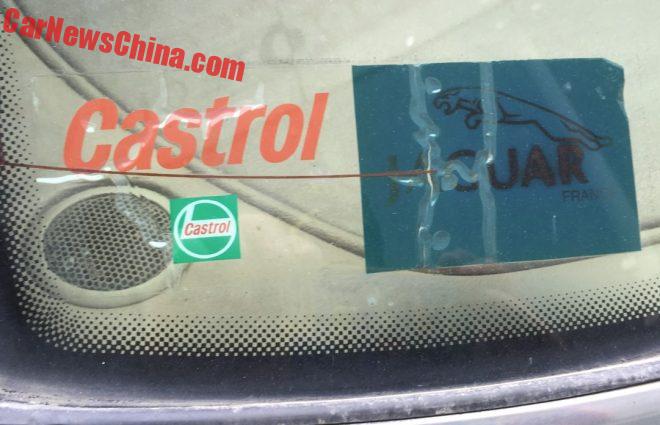 This beauty is on the other side of the rear windscreen. It is an original period Jaguar France Castrol sticker. Castrol is a British automotive lubricants maker, and they various Jaguar racing cars, including the TWR Jaguar XJR9 and the TWR Jaguar XJR14 Le Mans racers. 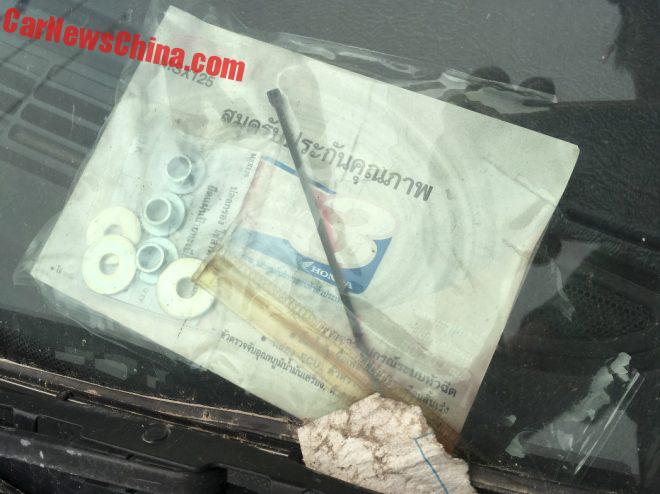 Behind the front windscreen lays this Thai-language manual for a Honda MSX125, aka Honda Grom, a motorbike that is assembled in a Honda factory in Bangkok. 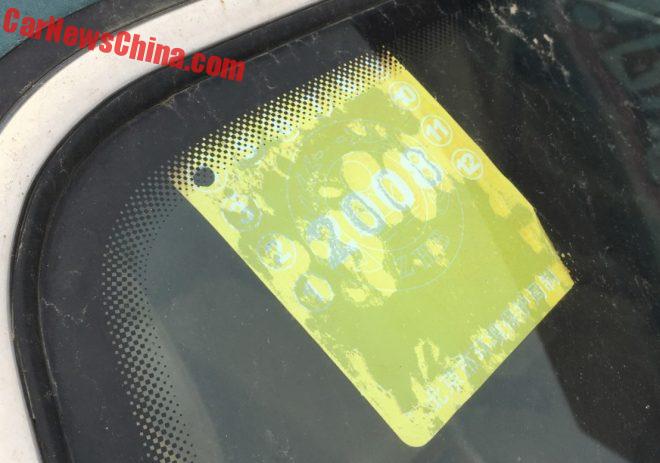 A sticker behind the front windshield with the last know registration in Beijing; 2010. After that the car went to and returned from Thailand, although the shop owner wasn’t sure about the exact timeline. In any way, it has never been insured or registered since it came back to Beijing. 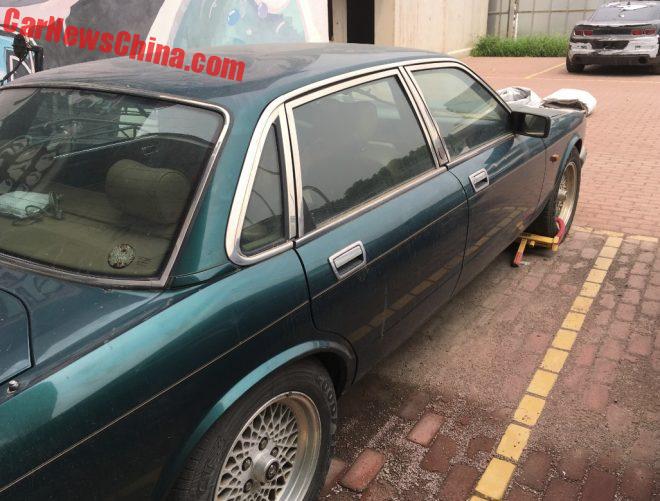 The sporty multispoke wheels are factory original. I am not sure about the yellow stripe. Other cars don’t seem to have it. Was this perhaps some kind of sporty special? Castrol sticker and all? If you know more please let me know in the comments. 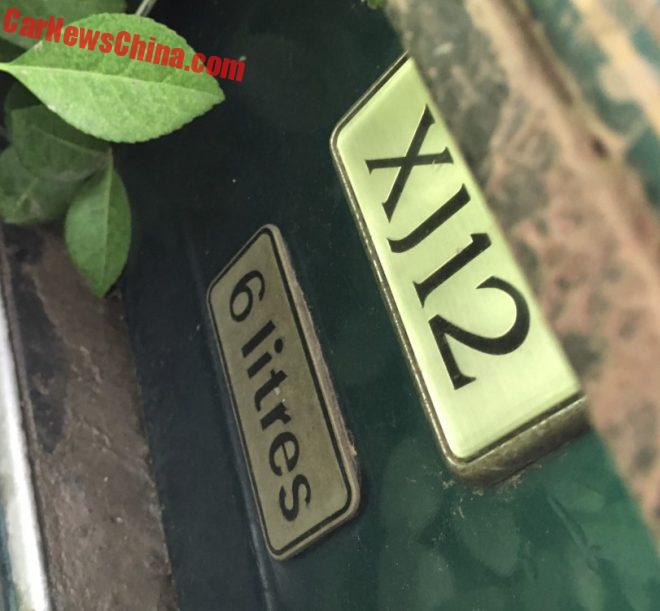 The XJ12 and 6 litres badges on the back. 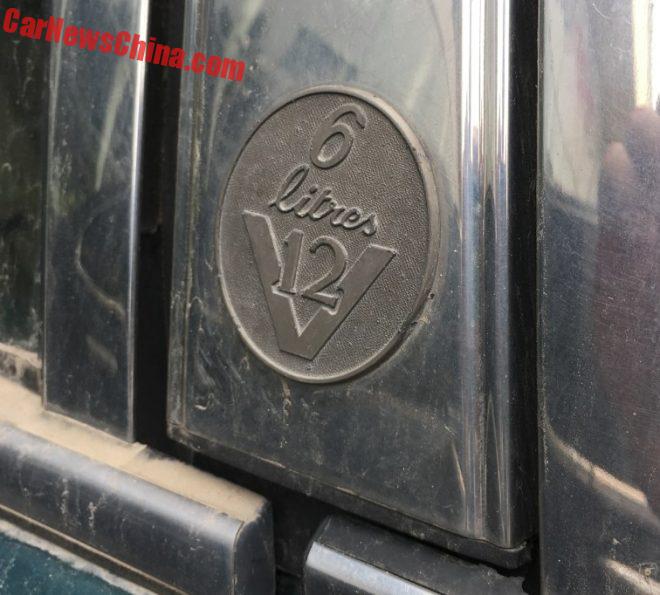 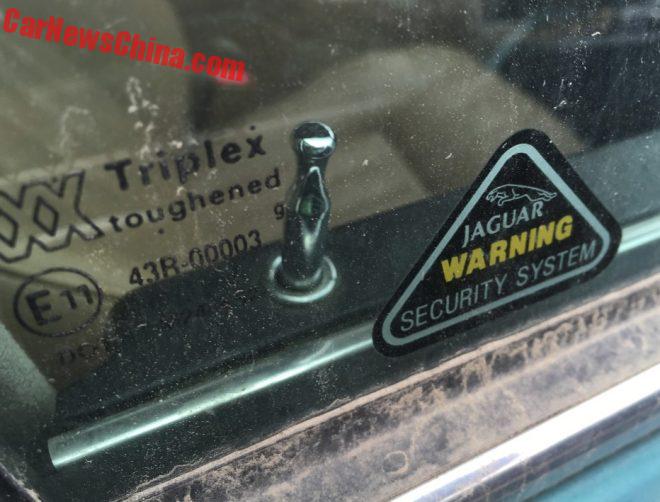 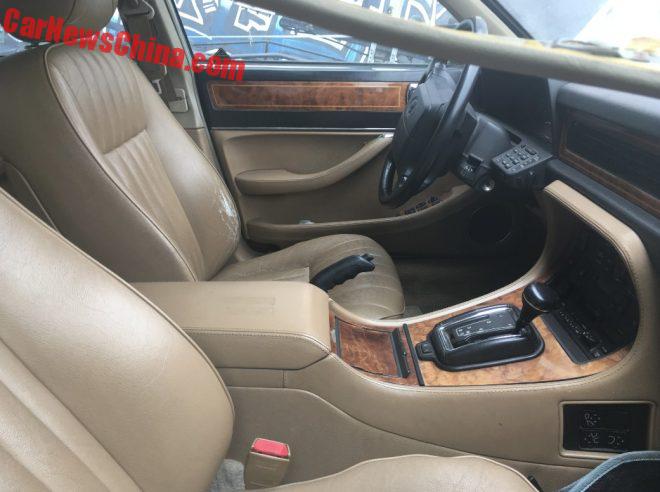 Something was hanging loose from the ceiling but the rest of the interior was in perfect shape. Seat-adjust buttons are on the side of the center tunnel! Wood and leather all good. Some patches on the driver seat but a good cleanup will fix most of that. Radio-cassette player was original! These are far too often replaced with crappy after-market CD players, but not here. 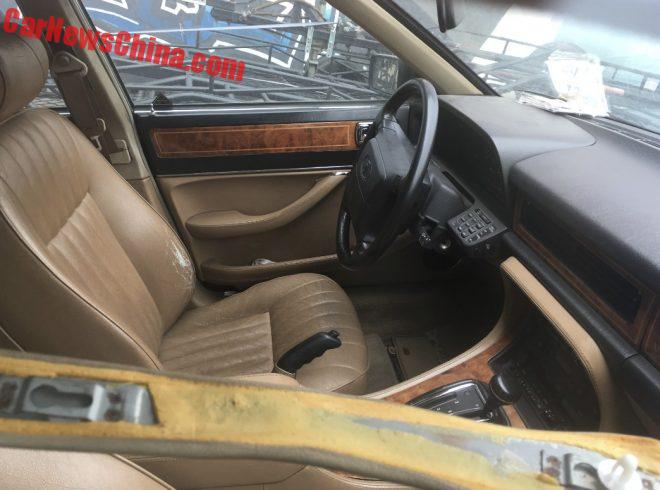 Beautiful wood panels in the doors. Handbrake with a black hand grip. 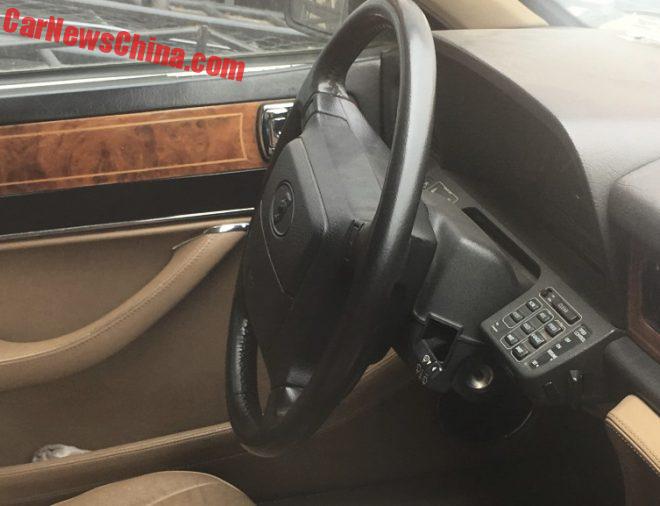 Another growler on the black steering wheel!

The XJ40/XJ81 was famous for its unreliable, hyper sensitive, experimental-really, and complicated dashboard electronics. Most notable are the small pods on each side of the steering wheel, with buttons for the trip computer on the right side and… 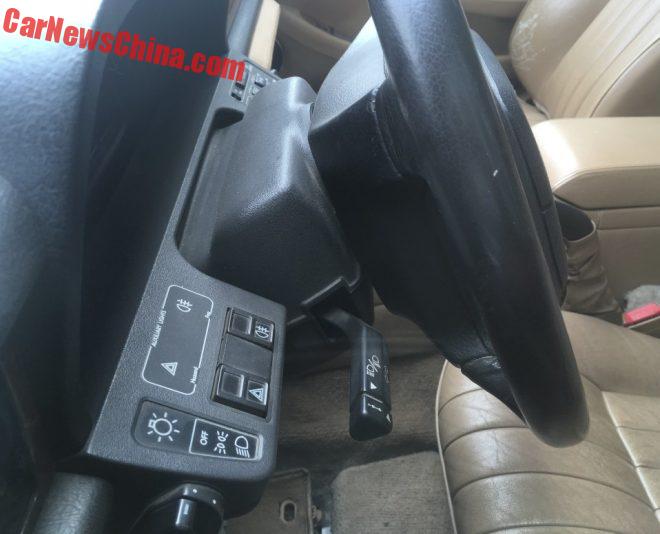 … touch-buttons for the lights and alarm light on the left. Absolutely brilliant! 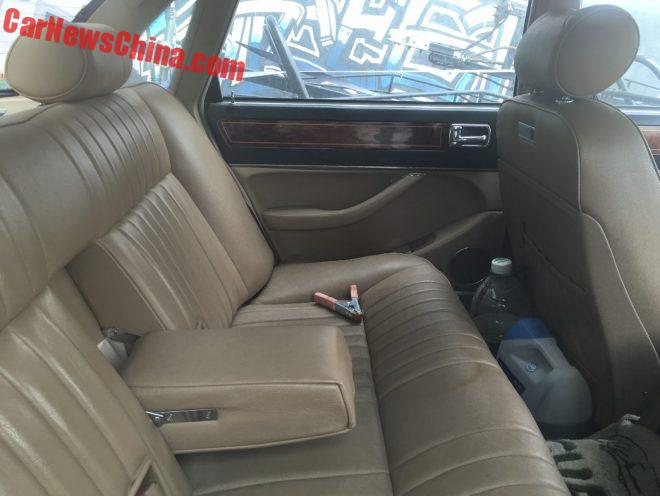 The rear bench looked great, almost like it was never used. Arm rest down here, showing the metal framework. It had a Jaguar floor mat covering the center tunnel, the mat looked very old, so it probably perid. The shop owner laughed at me when I inspected the mat! He thought I was mad. 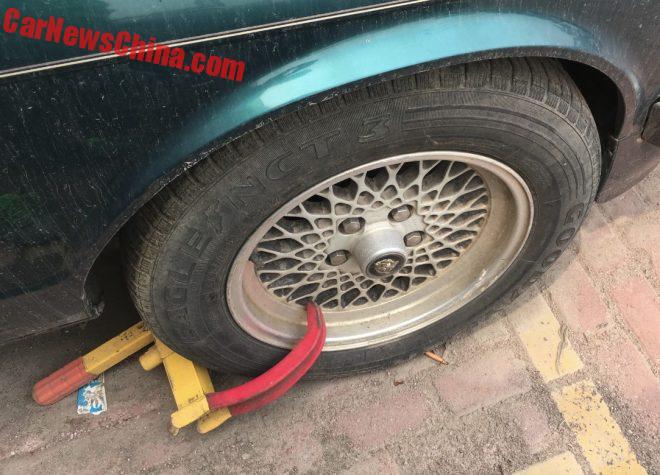 A wheel clamp as extra security against evil thieves. Not good for the wheel. 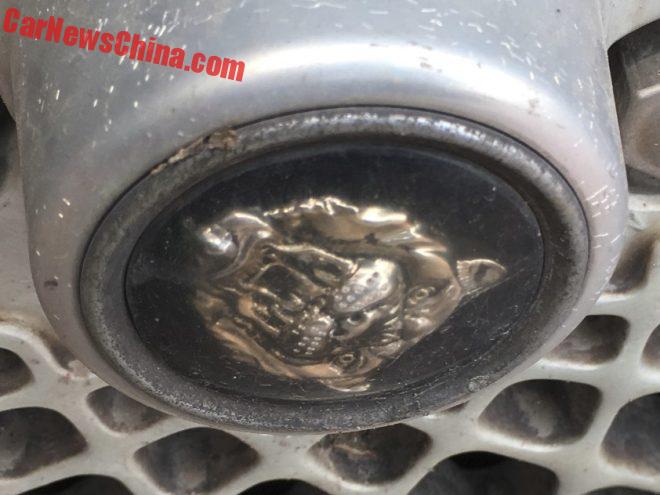 The growler is likely more effective against the bad guys, they will run like hell when they see this wild animal staring at them. 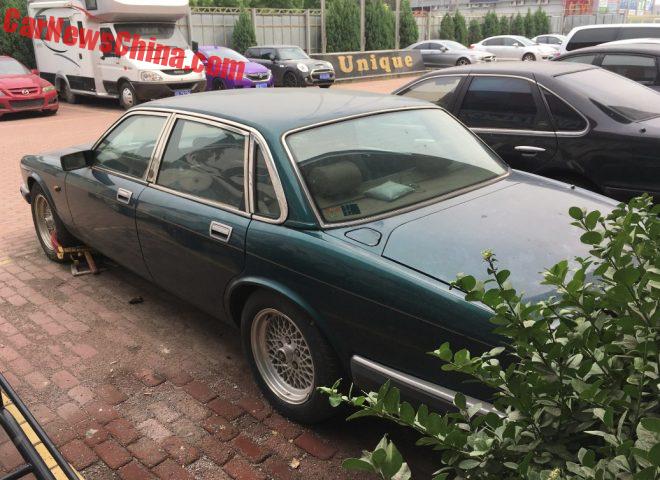 Fuel filler cap is located on the rear deck just behind the windscreen; another interesting solution. Thick chrome strips around the windows were in good shape, door handles in chrome as well, and another wheel clamp on the left-front wheel. 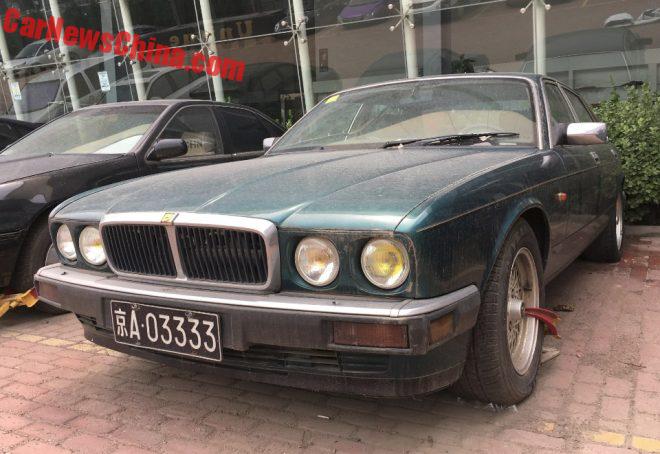 An extremely beautiful car. Let’s hope it finds a fine new owner someday, who fixes her up and gets her back on the endless roads of the Chinese capital. Long may she run!