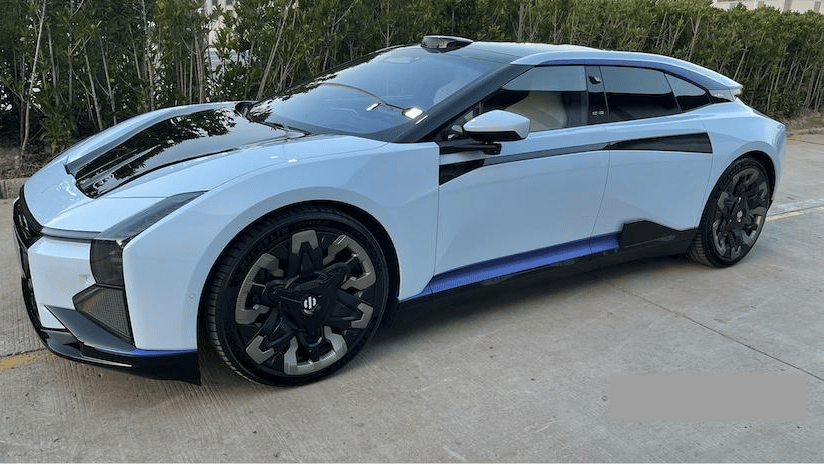 The HiPhi Z all-electric sedan coupe was spied in the wild in China. It stays in line with the concept presented in November 2021. HiPhi will launch the Z on June 21. Now let’s get acquainted with their upcoming flagship sedan.

HiPhi is a brand under Human Horizons Technologies, which in its turn is an electric vehicle company based in Shanghai. Human Horizons was established in 2017, while the HiPhi brand was founded in 2019. Human Horizons designs and manufactures electric cars, autonomous driving technology, and related products and services. As for the HiPhi, its first car deliveries started in 2021. It appeared to be the HiPhi X, a luxurious full-size CUV with a price range between 570,000-800,000 RMB (84,930-119,190 USD). It rapidly became one of the best-selling EVs in the premium cars segment. And now HiPhi is preparing the electric sedan called Z.

As mentioned, the HiPhi Z is an electric sedan coupe. It stands on the same platform as the HiPhi X. Its design is complex, with many shapes and lines. The Z’s lights are eye-catching, primarily because of their shape and size. Moreover, they are equipped with PML and ISD systems. The PML system lets the Z’s headlights create road projections and interact with the driver. As for the ISD system, it allows to customize lights pattern on those huge light units on the front and the back of the Z. Aside from the lights, the production version still has a LiDAR sensor on the roof. According to previous information, the Z has 31 driver assistance sensors on board.

The design of the HiPhi Z is all about aerodynamics. It has side skirts, winglets, front and rear spoilers, etc. Previously, we saw the HiPhi Z with aerodynamic wheel covers. But the newly spied model has strange wheel covers with complex shapes. It’s hard to say whether these covers can reduce drag or are a pretty design feature. Here we can also have a chance to know the size of the Z’s wheels. They are huge 285/40 R22 with Michelin Pilot Sport EV tires.

The interior of the HiPhi Z was also spied on. As we can see in the shots, it has a huge rotatable screen and a two-spoke steering wheel. We should mention that the production version of the Z hasn’t got an instrument cluster at all. It looks like the driver will get all the information via HUD. The center tunnel of the Z has a monostable gear selector, a hidden compartment, a wireless phone charging pad, and a hazard lights button.

We have also found some patent images of HiPhi Z’s interior. As we can see, it’s got a four-seat layout. As for the seats, they look comfy and sporty at the same time. The armrest area has two cup holders. Worth mentioning that there is no instrument panel as well.

We don’t know the exact dimensions of the Z’s screen. But we can notice its strange square on the screen. This is how the main menu of Z looks. We’ve also seen it in another bunch of patent images. The square is customizable. You can rotate it in 3D. The screen of the Z is also equipped with the HiPhi Pilot system.