Visit To The Hongqi Factory Museum In Changchun, China 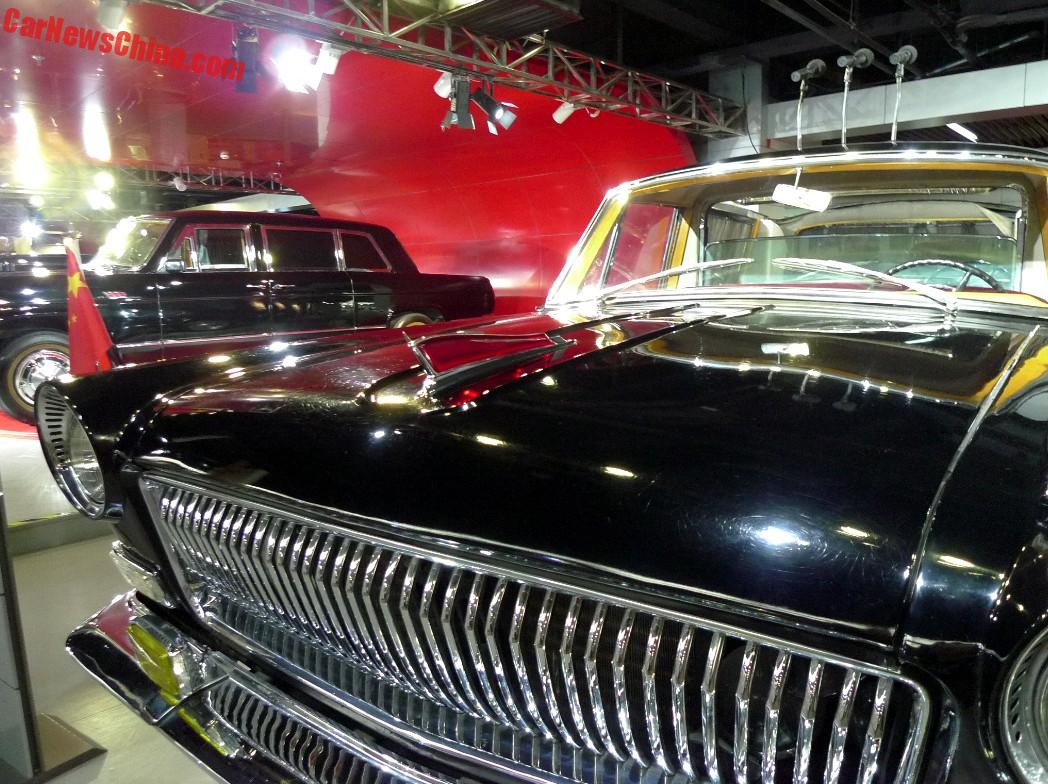 A while ago I was honored with an invitation to visit the Hongqi ‘Red Flag’ factory museum, located in the FAW headquarters in the great city of Changchun in Jilin Province. The museum is open on invitation only so getting in is very hard. I had been dreaming about the museum for years and last month it was finally my time. Thanks to everyone who made it possible.

Hongqi is China’s oldest and most famous car brand. It is owned by First Auto Works, or FAW. Hongqi was founded in 1958. Today the brand makes two production cars: the Hongqi L5 and the Hongqi H7.

The museum doesn’t have an English name. The official Chinese name is best translated as Hongqi Culture Exhibition Hall. When I visited there were 17 cars on display, six are permanently displayed and the other cars rotate.

The cars that are not displayed are being kept in a nearby warehouse. There are about 250 cars there; all sorts of specials, test cars, prototypes, and concept cars. I am still dreaming of a visit. Next time, perhaps..? But no worry, as I will also show you some of the cars that I didn’t see in a separate article.

Back now to the museum! All the cars in were in pristine condition, super clean and very well maintained. Most of the vehicles were displayed on brightly lit platforms. I could get very close to admire the details, and I was allowed to stay as long as I wanted. 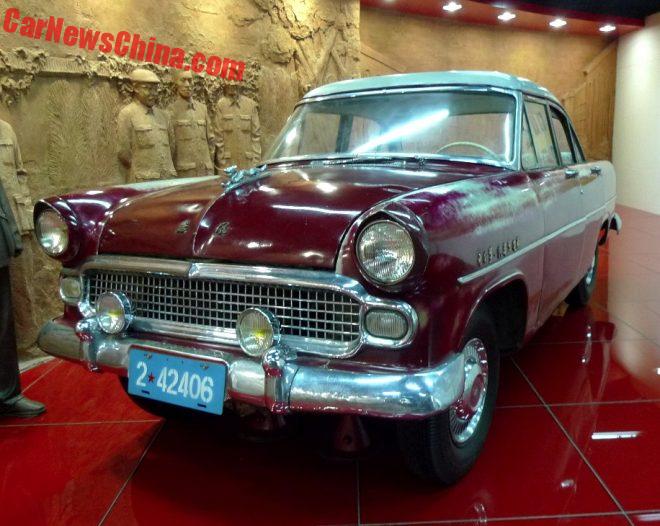 Starting now with the First Auto Works Dongfeng CA71, officially known as ‘China’s first car’. It was born in 1958 on the special request of Mao Zedong, who demanded a Chinese state limousine. Dongfeng means East Wind, and refers to the then-popular saying the east wind prevails over the west wind, which meant that the eastern Communist states were stronger than the West. 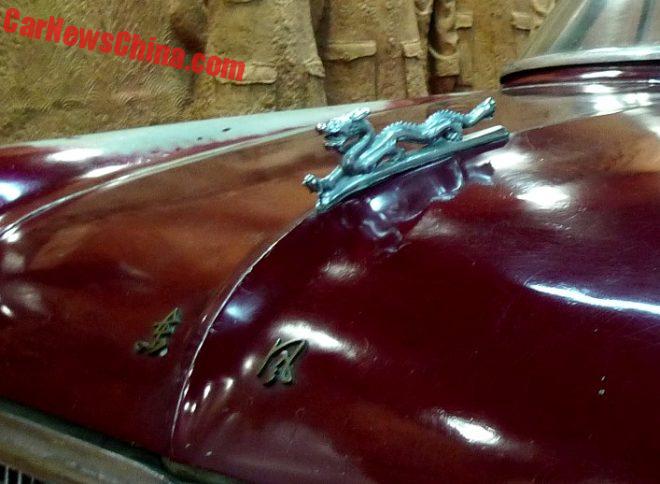 The Dongfeng name in characters on the bonnet, topped by a fierce Chinese dragon, traditionally a symbol for potent and auspicious power, and thus a fitting decoration on a state limousine. The ornament’s name was Jinlong, or Golden Dragon, although the ornament itself is silver colored.

The ornament became so famous that its name became synonymous for the car’s name; the Dongfeng CA71 morphed into the Dongfeng Jinlong.

The Dongfeng CA72 ‘Jinlong’ was design-wise loosely based on the first-generation Simca Vedette, which was made from 1954 until 1958. At least one Vedette was shipped to China to serve as an example for the CA72 during the latter’s development process. The 2.0 (1930cc) liter four-cylinder engine was based on the design of the 1955 Mercedes-Benz M121. In the CA72 it developed 70 horses.

How many CA71 were made is a mystery, as always with these early Chinese cars. Best guess based on various sources and photos is 20. There are two known examples alive today: the very first one on these photos and another early example that currently resides in the Beijing Classic Car Museum. 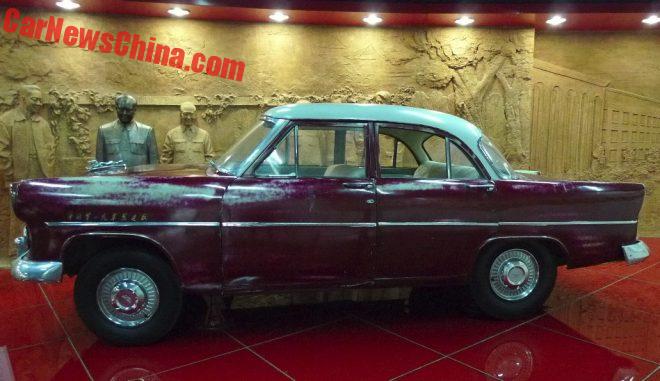 Note the statue of Mao looking at the car, accompanied by various others. The scene is a mirrored remake of… 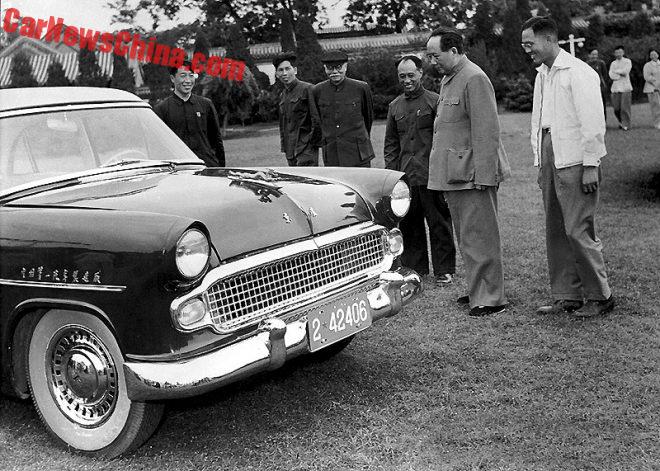 … a famous 1958 photo, where FAW engineers showed Mao the CA71 for the first time. Note open jacket of the man on the right of Mao. He can be seen on the left of Mao in the museum.

The car has the same license plate as the car in display in the museum, but it has very different wheels. The museum car also has two round fog lights on the bumper, which this car doesn’t have. The fog lights were likely a later addition. 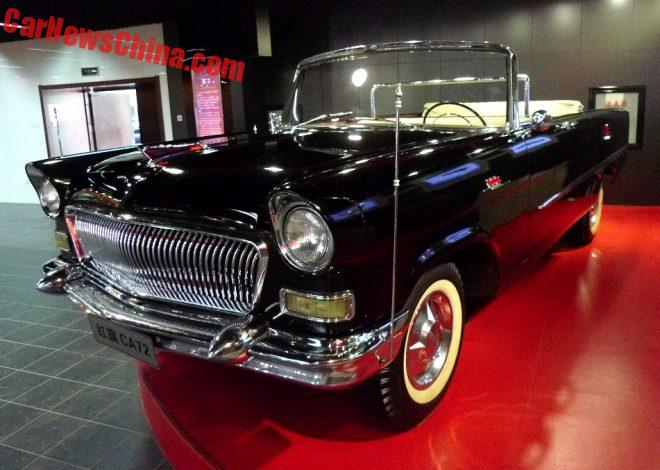 Moving on to the next marvel; the Hongqi CA72J parade car, looking absolutely magnificent the red flag ornament on the bonnet and missile shaped cones in the bumper. The CA72J was based on the Hongqi CA72 sedan. Only four examples were made between 1958 and 1962. 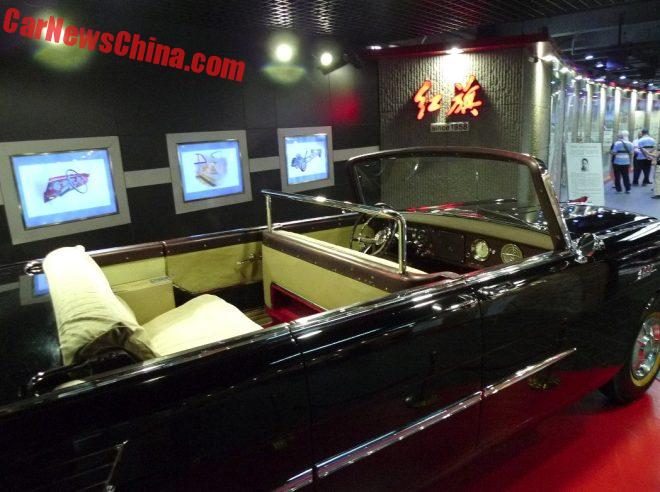 There are two kinds of parade cars, those with an open roof and those with a closed roof-sun roof construction.

In an open parade car the dignitary stands in front of the rear bench, waving to the populace with one hand while holding the handlebar with the other. This type of parade cars was mostly used for military parades and to parade foreign visitors through town.

This particular car was one of two examples built specifically for the October 1 National Day military parade in 1959. 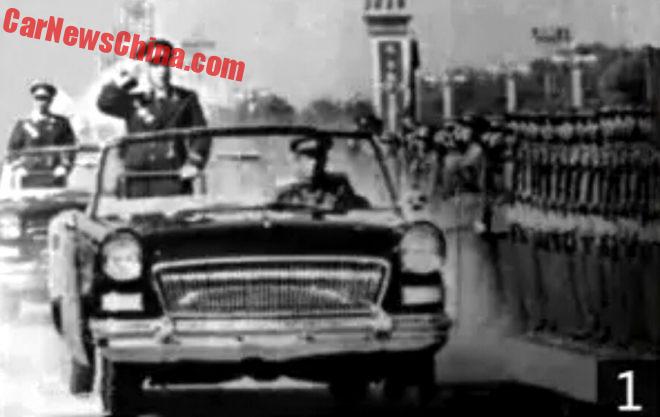 And here they are on Tiananmen! In the first car Minister of Defense Lin Biao, and in the second car General Yang Yong, commander of the Beijing Military Region and the official organizer and host of the parade. Lin salutes the troops while Yang holds the bar with both hands. 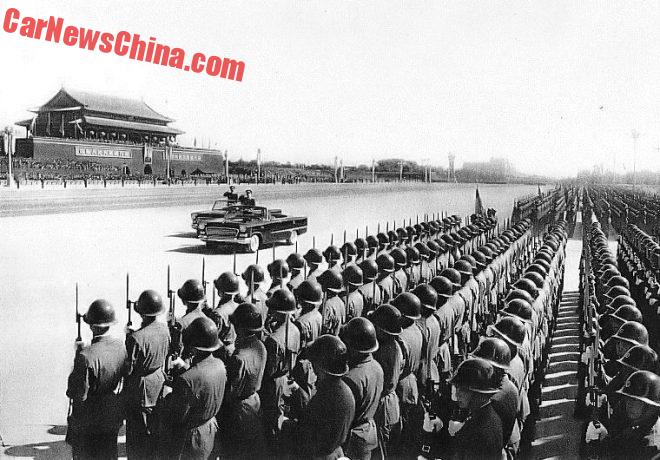 With the Tiananmen gate in the background, Mao’s portrait in the middle. Cars are closer to each other here, with the second car on 3/4 behind the first. This way of parade driving is still used today, with the Beijing commander still in the second car. Both Lin and Yang are saluting the pot-helmed soldiers. 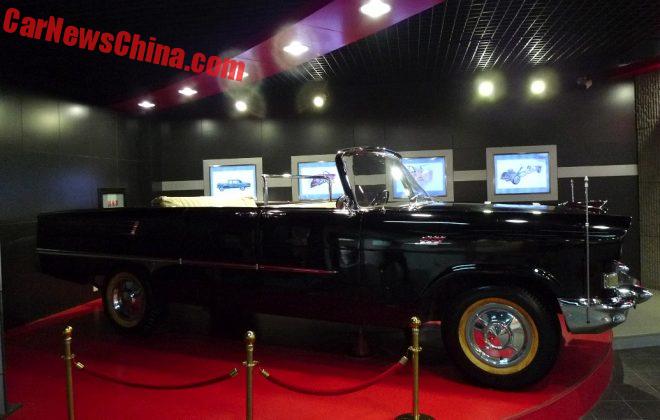 Suicide doors, white wall tires, chromed mirrors, chromed bumpers and a chromed windshield. The CA72J was all about Bling. It was powered by a 5.6 liter Chrysler V8. It had an output of 217hp, which isn’t very much for such a big car, with the heady weight of 2500 kilo. Top speed of the regular CA72 sedan was claimed to be 160 kilometer per hour, there are no numbers on the parade car, but I bet it wasn’t fast. Happily, parade cars don’t need to be fast. If they speed like a maniac, the populace won’t see anything. 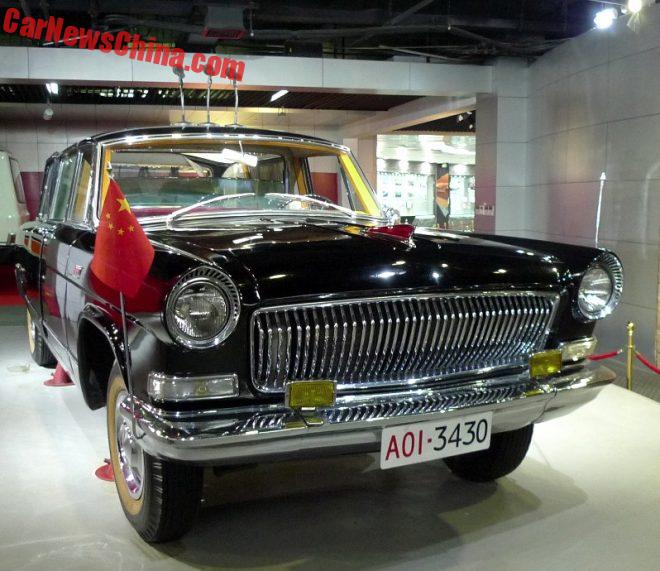 Next car! The extremely beautiful Hongqi CA770TJ parade car with its original A01·3430 military license plate. It is based on the Hongqi CA770 sedan. The middle section of the roof, between the B and C pillar, could be opened. The parading dignitary would stand, his head and chest above the roof.

Power comes from the same engine as the CA72J. It is a huge car, just under six meters long and two meters wide.

The CA770TJ was the first parade car that had a wireless microphone installed. It consisted of three microphones on top of the roof and a transmitter in the trunk. During a military parade the dignitary would address the troops. His words would be transmitted to a receiver alongside the road, and wired on to a loudspeaker system. 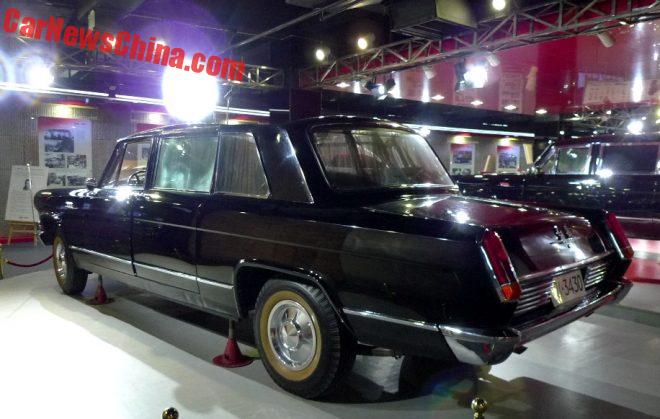 This particular car was one of two examples built specifically for the October 1 National Day military parade in 1984. It was used by ‘paramount leader’ and Chairman of the Military Commission Deng Xiaoping. The second car was used by Qin Jiwei, commander of the Beijing Military Region. 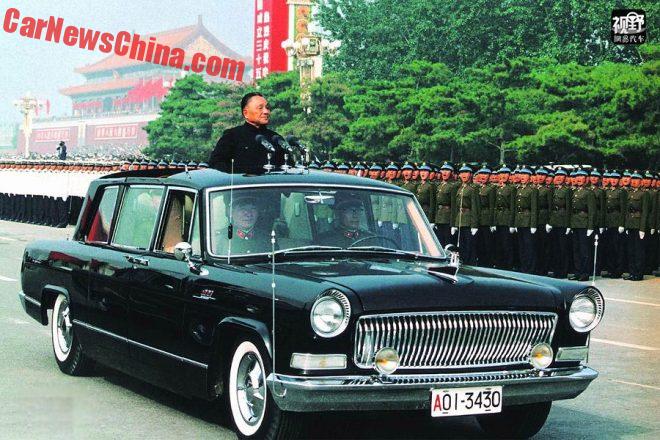 And here is Deng in 1984 on Tiananmen, with the same license plate. Deng might have had a great mind but he was not a tall man. Therefore Hongqi had installed a special lifting device that lifted Deng up some 40 centimeters, so he could properly conduct his inspection duties.

There microphones are of a different type than the ones on the car in the museum, and the fog lights are round, instead of square, like in the museum. The car on parade has white wall tires, the car is the museum has not. The differences might be explained by how these cars were treated.

Normally, after their duty was done, they would be stashed in whatever warehouse and left to gather dust. Whenever they were needed again they would be patched up by whoever was working that day. Fog light not functioning? Replace it with another. Tires deflated? Put other tires on. And so on.

The perfect restorations you see today are really a recent thing. Up until some 10 years ago nobody cared much about the oldies. Fortunately, now they do. 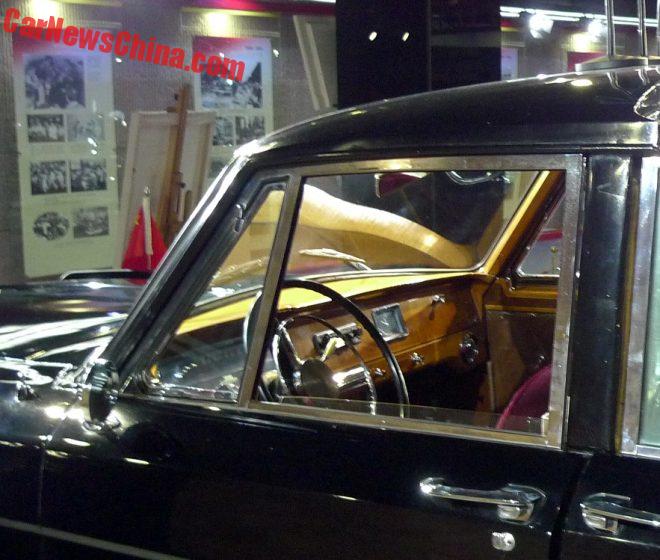 The interior is very similar to the CA770. The entire dashboard is covered in wood. Seats are covered in red cloth. 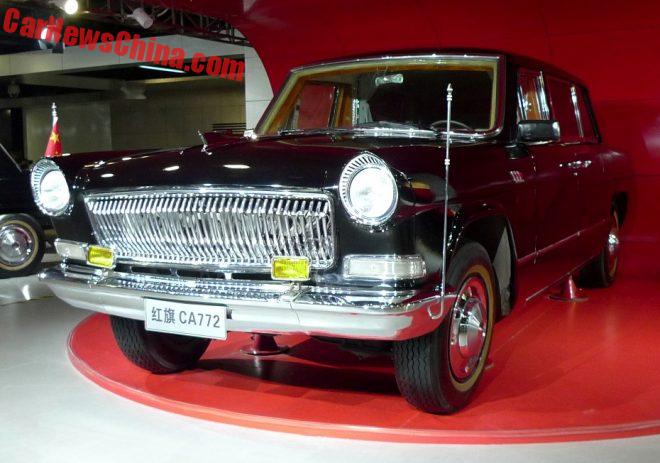 This is the Hongqi CA772, the giant under giants. It was an armored version of the CA770. About a dozen were made from 1967 until 1972, and one was used by Mao Zedong. The windows were fully bulletproof. Note the ultra thick A-pillars. The roof was strengthened too. But fast it was not, the entire ensemble weighed some five ton. 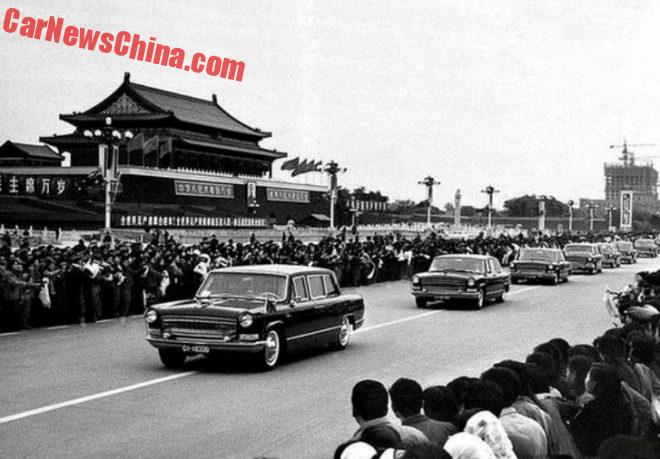 The CA772 in action, again at Tiananmen, during the visit of French President Georges Pompidou in 1973. He sits in the first car accompanied by Chinese Premier Zhou Enlai. They are followed by a convoy of other cars including at least four CA770’s. Pompidou’s car has the traditional chromed mirrors and round fog lights, whereas the car in the museum has the newer plastic mirrors and rectangular fog lights.

This is a period photo of the CA772, with rectangular lights and new-style mirrors. These cars were hand-made and in those days the processes in the factory not very strict, so they are all a bit different in detail. 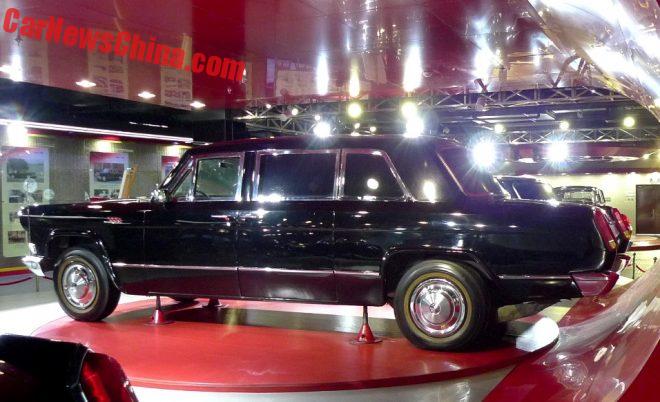 Extra thick roof, and the pillars are wider and partly covered with shiny steel plating. The C-pillar especially is widened, and the third-side window has a different design then on the CA770. 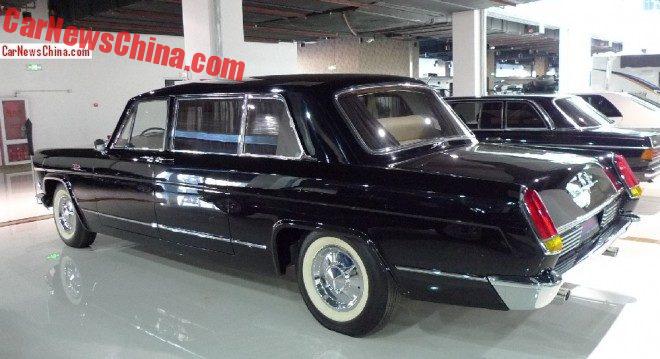 A normal CA770 for comparison. This is one of two fully restored examples that I met in a supercar shop in Beijing. See the full story here. 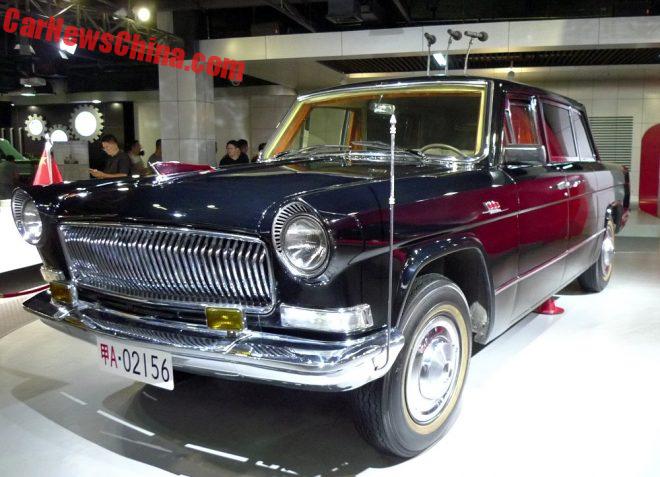 The parade continues again with this marvelous Hongqi CA772TJ, a parade car based on the Hongqi CA772. It too was armored with bullet proof windows. It has the new style mirrors and yellow rectangular fog lights. Five examples were made for the 1999 military parade. It has three microphones on the roof. It carries the original A·02156 military license plate. 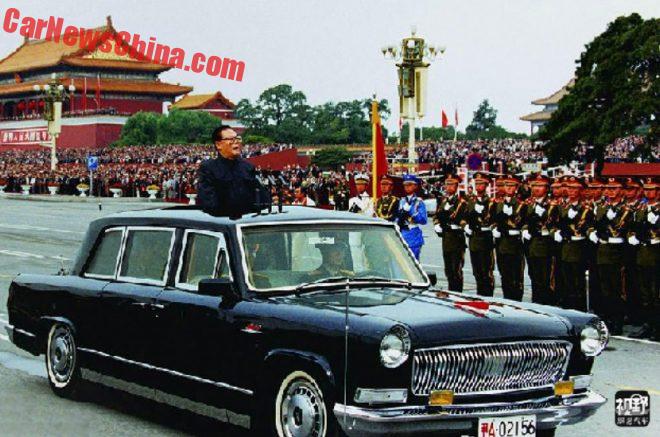 President Jiang Zemin on Tiananmen during the parade. He can be seen here addressing the soldiers through the microphone system. The third-side window is again of a different design, more notable it does not have a chrome strip on the D-pillar. 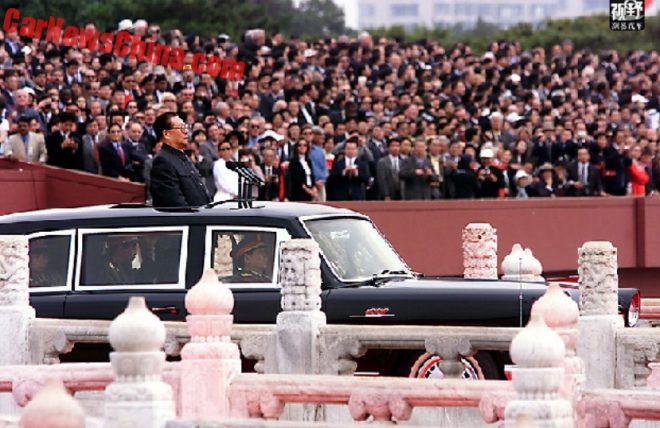 Crossing the bridge over the moat surrounding the Forbidden City, just before the start of the parade.  The grandstand in the background is normally reserved for foreign VIP’s. Jiang is accompanies by four army man wearing full uniform and hat. While parading Jiang is not really protected by all the armor… 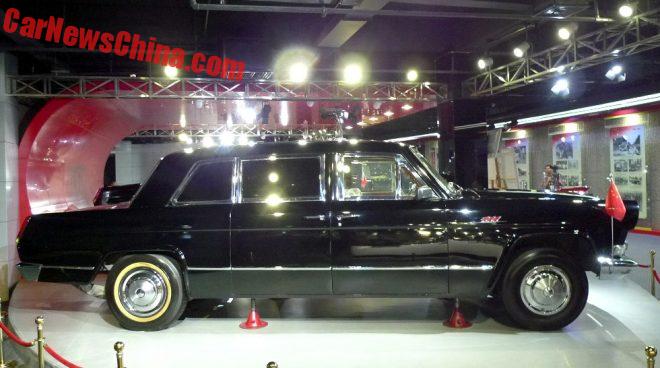 The car in the museum, which is said to be the one that Deng used, does have a strip on the D. The decoration on the lower part of the doors is different, and so are the wheels. Probably lost in restoration! 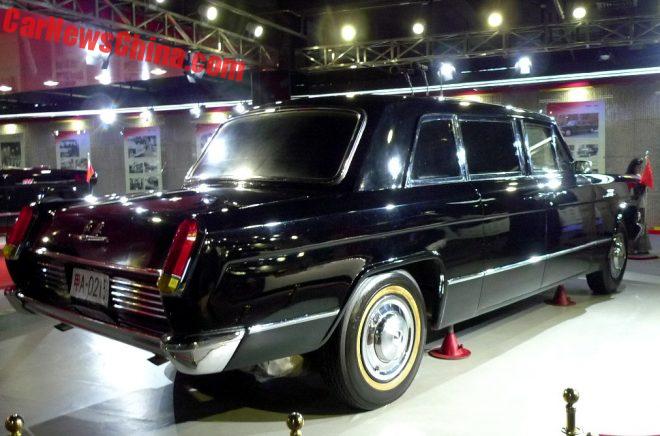 The frame of the rear window is very thick, and the glass has been darkened. The side windows are darkened too, except in front. White wall tires with beautiful shiny wheel covers. Exhaust pipes under the bumper. Chrome strips on each side of the license plate. And the lights hold a secret: 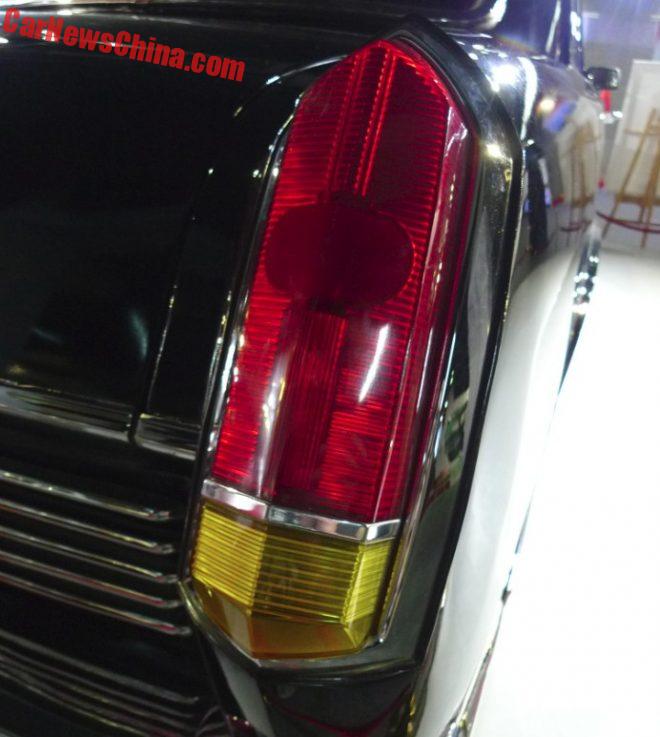 The red part of the light has a traditional Chinese lantern stamped in the plastic. It is like this on every CA770 and all its variants. But it is hard too see and thus mostly unknown. The lantern is really only visible when a moderately strong light shines straight on it. I was lucky to see it on the CA772TJ.

And that, Dear Readers, ends this story. Part 2 with many more Hongqi limousines is on the way.