Official Photos Of The Qoros 3 GT For China 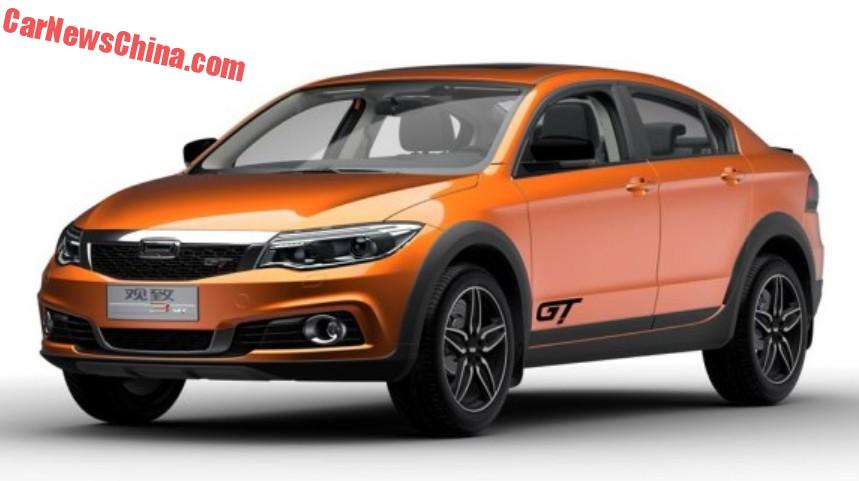 Qoros has released the first official photos of the Qoros 3 GT, a crossover based on the Qoros 3 Sedan. Design of the 3 GT was previewed by the 3 Q•LECTRIC concept car that debuted in April on the Beijing Auto Show. The 3GT has the typical crossy jacked up suspension, black grille, and black wheel arches. Additionally, as it is called GT, is has some sporty bits: GT badges and stickers, racy five spoke alloys, a tiny wing on the boot lid, and black mirrors.

Spoiler is nicely integrated in the boot lid. Lights are a bit too big for late 2016. Eound pipe tips are really cool. GT sticker on the front door is wuzzy, and the T is bigger than the G. And calling a crossover GT is wuzzy in any way. Qoros got this thing with names, like that crossover variant of the Qoros 3 Hatch they call the ‘City SUV’. And then they have an SUV based on the same platform as all the Qorii 3, but they call it the Qoros 5.

The Qoros 3 GT will be powered by the same 156hp 1.6 turbo that powers all the other Qoros cars. This exact engine has been in use since the very beginning of Qoros in late 2013 and it hasn’t been upgraded yet. Some extra horses would we welcome, especially for the GT, which has to carry all that extra black plastic around!

The GT will debut on the Guangzhou Auto Show in November and launch on the Chinese car market soon thereafter. And that is not the end of the cross business at Qoros; next up is a crossover wagon. Let us guess how they will call it! The Qoros 3 Shooting Brake. The Qoros 3 Speed Wagon. The Qoros 3 Coupe. The Qoros 3 Turbo Estate Car. The Qoros 3 Crosser. We, cannot wait.