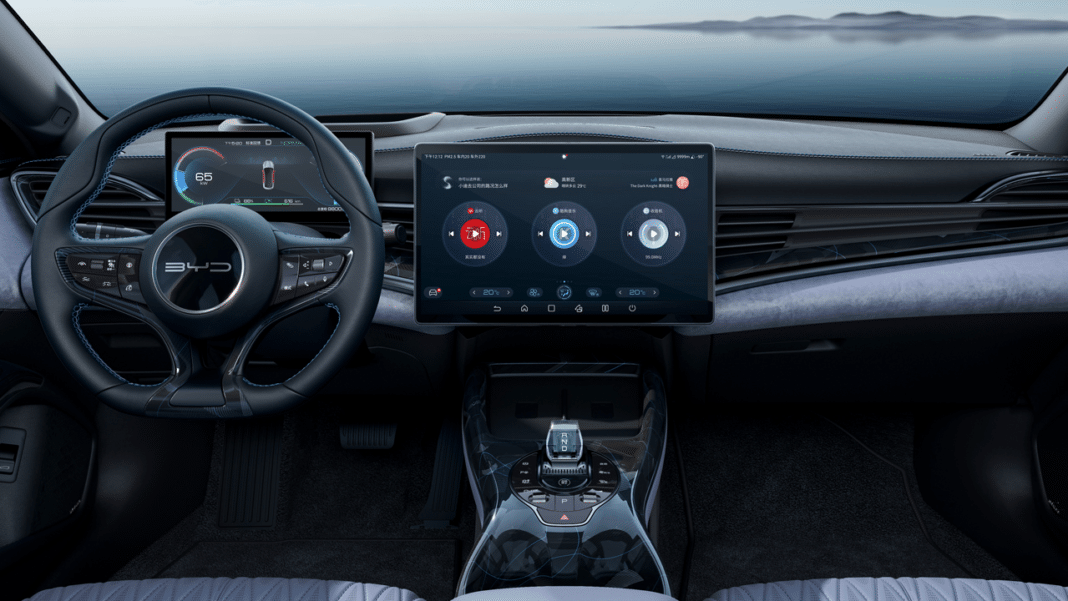 The interior of the BYD Seal electric sedan was unveiled in China. It got a giant rotatable screen, a sporty steering wheel, and a crystal-looking gear shifter. Overall, the interior looks nice and modern. The Seal will be launched in May.

What is BYD Seal?

The BYD Seal is an all-electric sedan based on BYD’s e-platform 3.0. It is the second car in BYD’s Ocean series. Its design is inspired by the Ocean X concept car unveiled back in September 2021. Since then, BYD has done a great job with this car. They shared official images of the Seal exterior in April.

Speaking about the Seal, first, we’d like to highlight its dimensions: 4800/1875/1460 mm with a wheelbase of 2920 mm. To make it clear, the Seal is 106 mm longer, 26 mm wider, and 17 mm higher than the Tesla Model 3. The Seal’s wheelbase is 45 mm longer than the Model 3’s. The Seal is aimed at the Model 3. But its exterior appearance somehow strongly reminds the Porsche Taycan.

The Seal’s interior has its ocean vibe. It has a blue, black, and gray color scheme with many different materials like alcantara and leather. The air vents of the Seal have a wavy pattern and are decorated with a delicate blue trim.

The door handles also look attractive, with a shell-like shape. It is exciting that the door handle is integrated into the speaker. Worth mentioning the sound system is made by Dynaudio, a Danish loudspeaker maker.

The steering wheel of the Seal has three spokes and a flat bottom. Its shape looks like a fish’s tail. It also has blue stitching and some buttons for autonomous driving adjustments. Behind the wheel, we can see a large instrument panel. The main screen is likely borrowed from the BYD Destroyer 05. It is enormous with a 15.6-inch diameter and can rotate landscape-portrait.

The center tunnel of the Seal also has an attractive wavy shape and is made of glossy plastic. It has two wireless charging pads and two cup holders. The center tunnel also has a crystal-looking monostable gear shifter. It is eye-catching. There are a drive mode selector, volume control, hazard lights button, and other buttons. They are placed in a circular element. There is a roomy compartment under the center tunnel.

Overall, the BYD Seal’s interior is fine and very eye-catching. We remind you it will be launched in China in May and later will also hit the Australian market under the Atto 4 name.