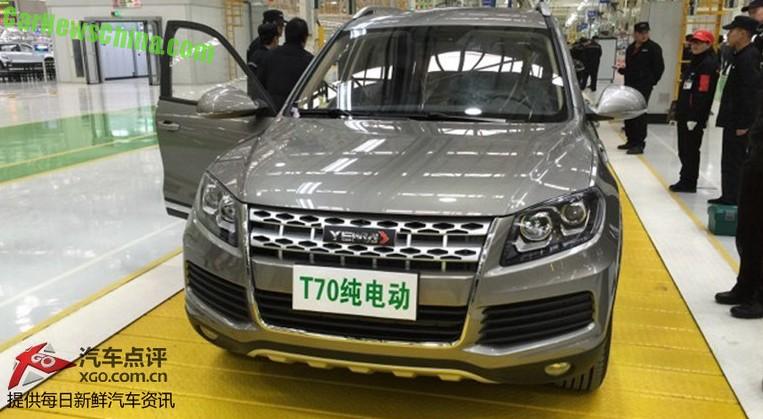 This is the Yema T70 EV, an electric car for China based on the petrol powered Yema T70 SUV. The T70 EV is scheduled for launch on the Chinese car market in April, just one month after the planned launch of the much-delayed T70. Yema says pre-production of the T70 EV has started in a brand new factory in Mianyang in Sichuan Province with a capacity of 120.000 cars a year.

Yema released these two photos of what is supposed to be the T70 EV. There are however no photos of the power train or the interior, and the white EV plates were clearly photo shopped, but at least the text is in green instead of blue. Now for some specs, and they are impressive. Yema claims a range of 400 kilometer. which is about 2oo kilometer more than any other Chinese EV, and even the BYD-Daimler Denza can’t go further than 250 kilometer.

Top speed is claimed at 140 kilometer per hour, and charging will take two hours for a full charge on a fast charger. Price including green-car subsidies by central and local governments will range from 220.000 yuan to 280.000 yuan, says Yema. Subsidies for this kind of vehicle top around 90.000 yuan, so clean it would costs at least 310.000 yuan.

A panoramic view of the new green-car factory, looking very big and very empty. But is might be buzzing soon because a lot is on the way. Besides the T70 EV Yema is also working on the Yema C30 EV and a fuzzy compact Suzuki style. But then again, 120.000 per year is more than ten times (!) the size of the entire electric car market in China in 2014. Yema thus, is making a really big bet on electric.