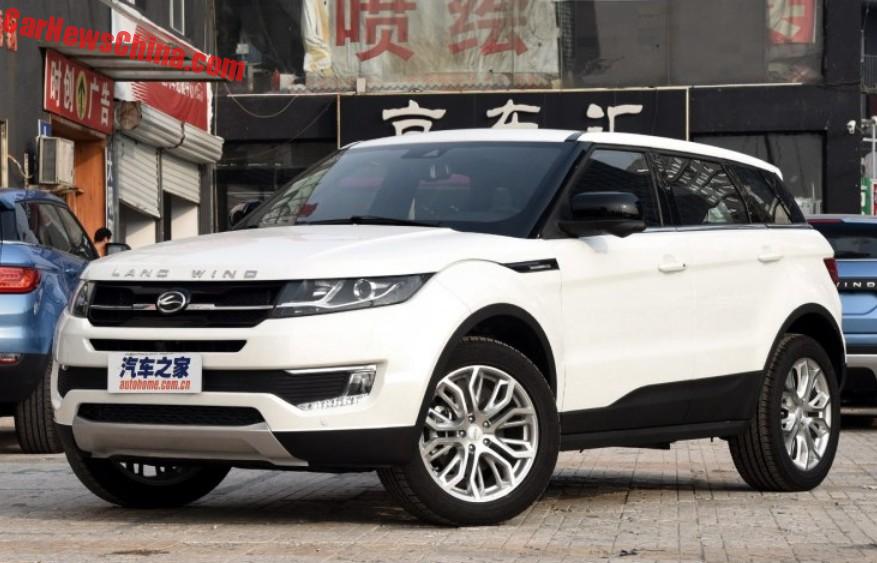 Reuters reports that Jaguar Land Rover (JLR) is suing the Chinese automaker Jiangling Motor (JMC) for copyright infringement and unfair competition. JMC is the largest shareholder of Landwind, the maker of the controversial Landwind X7, which is a near-perfect copy of the Range Rover Evoque.

Is JLR going to win? Based on looks alone they sure should, as the photos below will prove. But this being China; there is more than meets the eye. 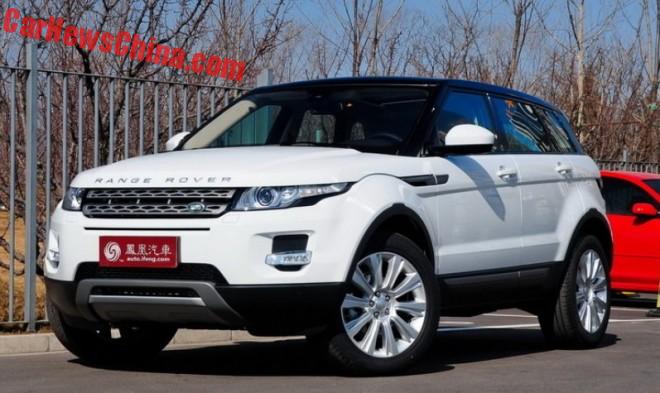 The case: JLR will have to prove they own the copyrights on the Evoque’s design in China, that these copyrights were infringed, and that Jiangling was able to compete unfairly because of the alleged infringement.

China has very strict rules for claiming copyrights. A foreign automaker should register the design of a new car separately in China, even when it is already registered in the country of origin, in this case the U.K. There are still automakers, even now, who forget that. If they do, and a Chinese automaker registers a similar design first, the copyright is legally ‘Chinese’. The foreign automaker can still sue, but it is in a much weaker position. JLR did only register the design of the Evoque when they were going to make it locally, in a joint venture with Chery, but not when it came out back in 2011.

Assuming the court will agree with JLR that they own the copyrights, JLR then has to prove these rights were infringed. Looking at the photos and dimensions that should be easy. But in the past Chinese courts have been sensitive for arguments by Chinese automakers saying that “the cars don’t look alike because the headlights are different”, and similar. And of course, Jiangling made sure to add just enough differences in their design for such a line of defense to work.

Unfair competition will be hard to prove, mostly because the Evoque and X7 don’t really compete. The China-made Evoque starts at 448,000 yuan ($68,000) and the X7 at 129,000 yuan ($19,600). Furthermore, Landwind will argue that brand-conscious Chinese car buyers that can afford an Evoque won’t buy an X7. And they would be right about that. Somebody who is in the market for the real thing isn’t going for the copy.

And then there are the political dimensions. In a high profile case like this, which will be held in a court in the capital Beijing, the Chinese government will always have a say. It is not easy to predict what that say will be. They might want to protect Jiangling, or they might want to set an example that local automakers got to stop cloning. The government is well aware of the bad image of China that these automakers create, and they are very sensitive about that. But even if the government wants to set an example, and that is a very big if, an outright win for JLR seems unlikely.

The biggest problem however seems to be time. JLR is rather late with their lawsuit. The Landwind X7 was launched on the Chinese market in August 2015, it had its public debut in November 2014, the first clear spy shots popped up in June 2014, and the first patent images appeared in April 2014. All this time JLR did nothing. That they will have to explain, and it won’t be easy. The judges will wonder why Landwind apparently wasn’t infringing any copyrights two years ago, but does today.

A lot of hurdles to clear for JLR.

Landwind is a Chinese car maker jointly owned by Jiangling Motors and Changan Auto, coincidentally (or not?) both joint venture partners of Ford, with Jiangling-Ford and Changan-Ford respectively. Ford owned Land Rover until 2008 when they sold it on to the TATA conglomerate of India. 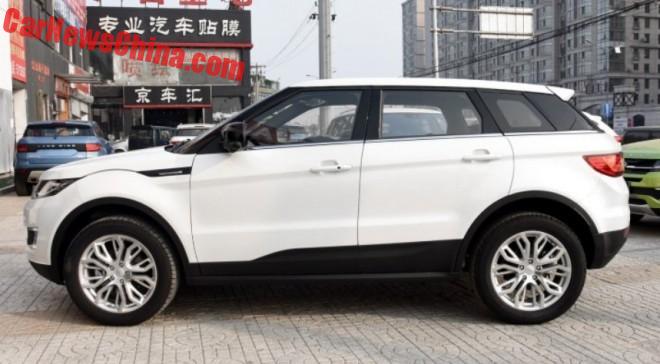 Size wise it is the same car, and the wheelbases prove the platform is of the same size as well.

The X7 is available with only one engine; a Mitsubishi sourced 2.0 turbo petrol with 190hp and 250nm, mated to an eight-speed automatic, FWD. Fuel consumption: 10.4 liter per 100 kilometer.

The 2.0 Mitsubishi engine is made locally at the Shenyang-Mitsubishi engine joint venture, an outfit that sells engines to zillions of smaller Chinese automakers, including to Zotye, an infamous copy-paste company that uses the very same 2.0 turbo in their Zotye SR8 Porsche Macan clone.

The Evoque is powered by a Ford-sourced 2.0 turbo petrol with 240hp and 340nm, mated to a nine-speed automatic, AWD. Fuel consumption: 10.8 liter per 100 kilometer. 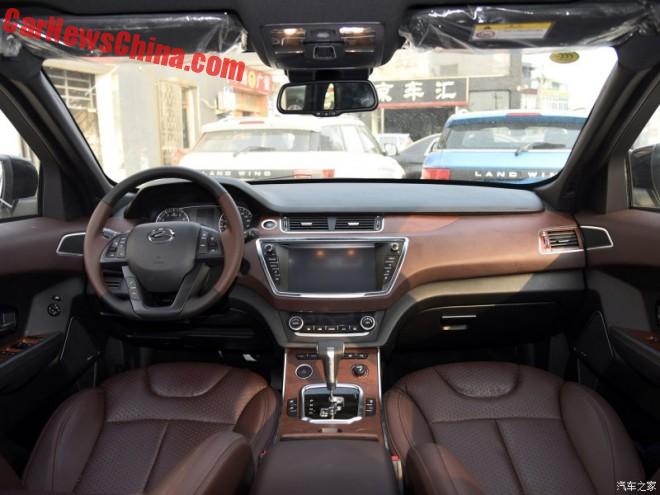 The interior is inspired by the Evoque too, but there are less similarities than on the outside. The most obvious are the design on the instrument binnacle, the position of the start-stop button, the top part of the center stack, and the air vents in the center stack. Most notable difference is the touch screen, which is actually much larger in the Landwind than in the Evoque. 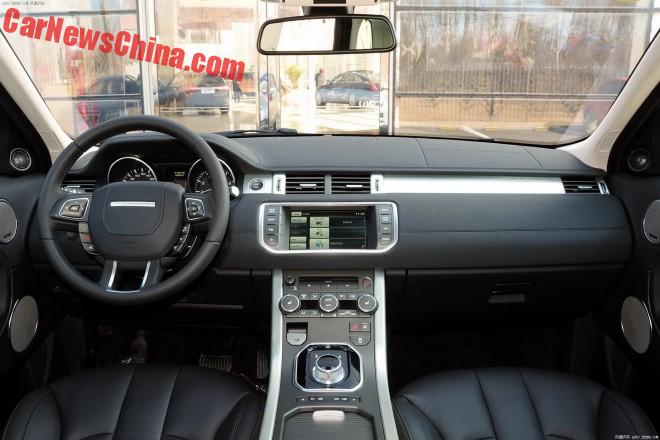 Interestingly, the seats are very similar again. This is the Landwind, and… 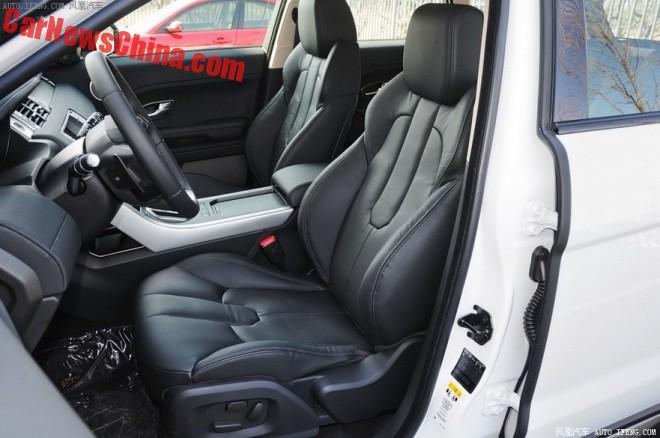 … this is the Evoque. 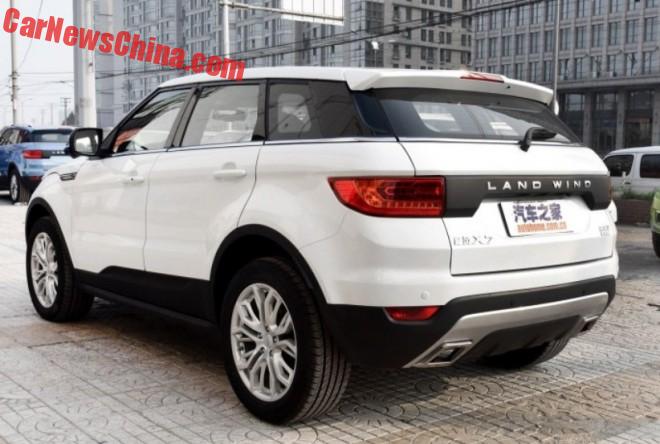 Roof line, rear door, bumper; they are all very similar. It is even more obvious when you meet one on the streets, at first and second glance it is an Evoque, only when you look at it carefully you will realize it is in fact a Landwind. The casual observer will not look three times and assume it is a Range Rover. JLR should just ship in 10 random people, let them look at a Landwind, and ask them what car it is. That might help to convince the court… 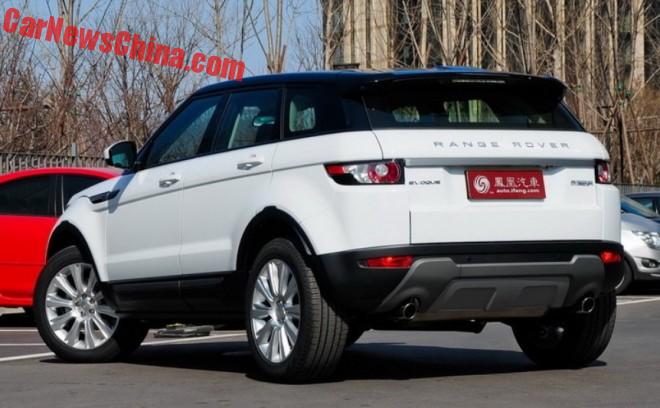