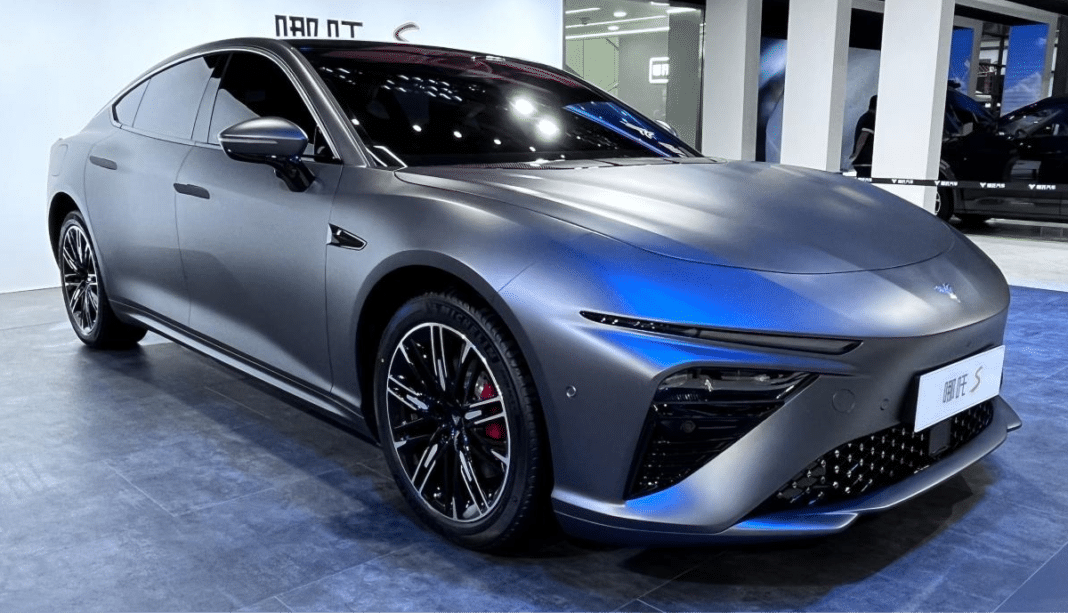 The Neta S is a sporty NEV sedan from Hozon Auto. It has a stunning appearance, EREV (range-extender), and EV versions. The Neta S will rival XPeng P7, NIO ET5, and other new energy vehicles in China. Now it is presented at the Guangdong-Hong Kong-Macao Auto Show. Let’s get to know the S better.

Neta was presented in 2018 as a passenger car brand under Hozon Auto. Its first EV hit the market in the same year. Currently, Neta sells two models: the V Pro and the U Pro. If you wonder, in April 2022, Neta sold 8,813 vehicles, more than NIO, Tesla (in China), and Li Auto. Neta’s way of attracting buyers is a free charging network. If you buy a Neta EV in China, you can get a free home charger or 1,000-2,000 kWh/year of free charging at Neta chargers.

The Neta S stays in line with the official images presented earlier. We can see the same face with ‘cat’s whiskers’ LED running lights, pop-out door handles, and a sloped roofline. From the back, the S has a hip, long taillight unit, and a ducktail spoiler. Worth mentioning that the sedan presented at the Auto Show is an EV as it hasn’t got visible exhaust pipes.

The Neta S’ windows are heavily tinted, so we can’t see an interior. Previously Neta shared its official pictures. In them, the S looked like a charming place to be. There were wood, leather, and Alcantara materials, and three screens with the 17.6-inch main screen. Neta shared the S has a 21-speaker sound system with a maximum output of 1216 W.

The Neta S sits on Hozon’s ‘Shanhai’ platform. It enables wheelbases of 2750-3100 mm, the flexibility to run in front, rear, or four-wheel drive, and EREV and EV versions. The Shanhai platform isn’t specified for sporty-performance cars. Even MPVs could be based on it. Unfortunately, Neta hasn’t stated the S’ dimensions yet.

As for the powertrain, the S has EREV and EV versions. The sedan with a range extender can run up to 1000 km (NEDC). As for the fully electric one, its range reaches 710 km (NEDC). Neta claims that the S’ electric motor’s power consumption is 12 kWh/100km. It is an intense number.

Neta claims the S has 13 cameras, 12 ultrasonic radars, 5 millimeter-wave radars, and 2 LIDAR sensors on board. Huawei MDC smart platform with 200 TOPS powers it. The S presented at the Auto Show doesn’t have LIDAR sensors.

Neta didn’t share any information about the launch time. We will monitor the Neta S, so stay tuned!